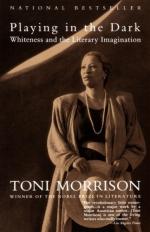 Playing in the Dark: Whiteness and the Literary Imagination Summary & Study Guide

Toni Morrison
This Study Guide consists of approximately 37 pages of chapter summaries, quotes, character analysis, themes, and more - everything you need to sharpen your knowledge of Playing in the Dark.

Playing in the Dark: Whiteness and the Literary Imagination Summary & Study Guide Description

Playing in the Dark: Whiteness and the Literary Imagination Summary & Study Guide includes comprehensive information and analysis to help you understand the book. This study guide contains the following sections:

This detailed literature summary also contains Topics for Discussion and a Free Quiz on Playing in the Dark: Whiteness and the Literary Imagination by Toni Morrison.

Toni Morrison's reading of "The Words to Say It" in 1983 sparks her interest in cataloging the way that black people ignite moments of discovery in literature not written by them. The main reason that these matters are so important to Morrison is because blackness and black people do not stimulate the same notions of dread, anarchy or love for her. As a black writer, she struggles with a language that evokes hidden signs of racial superiority. It is a common assumption that all readers of American literature are white, and Morrison wonders what such an assumption has meant to the literary imagination. She ponders how literary whiteness and blackness are made and what the consequences are of such a construction.

Toni Morrison argues for extending the study of American literature into a wider landscape. She is interested in what prompts and makes possible the process of entering into what one is estranged from. Her work requires her to think about how free she can be as an African-American female writer in a genderized, sexualized, racialized world. Morrison debates the assumption the American literature is free from and unshaped by the four hundred year presence of African-Americans in the United States, claiming that the contemplation of a black presence is central to understanding America's national literature. It is important to see how inextricable Africanism is in literary criticism, as well as to consider the strategies used to erase its presence from view. Silence and evasion rule the literary discourse on race. Morrison risks the accusations that she has a vested interest in the topics since the subject is far too important to be ignored. She analyzes Henry James' "What Maisie Knew" and Willa Cather's "Sapphira and the Slave Girl."

Toni Morrison cites examples from Edgar Allen Poe's "The Narrative of Arthur Gordon Pym" to support her theory that the white image is related to the erasure of the black figure. She also states that figurations of impenetrable whiteness surface in American literature whenever an Africanist presence is engaged. In early America, the slave population offers itself up as surrogates for meditations on the problems of human freedom and terror. A major theme in American literature is the ways in which artists transfer their internal conflicts to a "blank darkness." Morrison takes from Bernard Bailyn's "Voyagers to the West" a succinct portrait of the process by which the American is established as new, white and male. The act of evading race in literature is a racist act in and of itself. The dark, abiding Africanist presence informs in American literature, hovering in the background as a shadow even when the literature is not about Africanist characters or idiom. Slave narratives are a publication boom in the nineteenth century as the question of freedom versus slavery rages. Africanism serves as a vehicle by which the American self knows that it is not enslaved in works by writers such as Twain, Melville and Hawthorne. Morrison analyzes Mark Twain's "Huckleberry Finn," as well as Edgar Allen Poe's work which she claims shows how the concept of the American self is similarly bound to Africanism though covert about its dependency. If one follows through with the self-reflexive natures of these encounters with Africanism, it reveals that the images of blackness can be evil and protective, rebellious and forgiving, fearful and desirable. It reveals of the self-contradictory features of the self, while writers seem to say that whiteness alone is mute, veiled, senseless and implacable.

Toni Morrison claims that race is used metaphorically more now perhaps than ever before. Africanism acquiring a metaphysical necessity is not the same as losing its ideological utility. The presence of blacks is inherent and inextricable from the definition of American-ness. Morrison analyzes Hemingway's works and their distance from African-Americans, stating that his work is free of agenda and sensitivity, making it a pure case study for her theories. She investigates the use of a black crew member as nameless and stereotyped compared to named and personalized in "To Have and Have Not." Morrison explores Hemingway's use of the Africanist presence in male and female sexual relationships and discusses Hemingway's romantic attachment to nurses. In closing, Toni Morrison's deliberations about not about a particular author's attitudes toward race. Studies in American Africanism should investigate the ways that the Africanist presence and personae has been constructed and the literary uses it has served. Morrison's is not an investigation into racist or non-racist literature. She takes no position nor does she encourage one on the quality of a work based on an author's attitude toward race. Morrison's project is an effort to avert the critical gaze from the racial object to the racial subject. All of mankind is bereft when criticism is too polite or too fearful to notice a disrupting darkness before its eyes.

More summaries and resources for teaching or studying Playing in the Dark: Whiteness and the Literary Imagination.

Playing in the Dark: Whiteness and the Literary Imagination from BookRags. (c)2022 BookRags, Inc. All rights reserved.