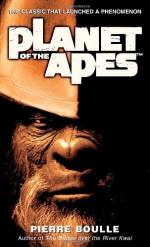 Planet of the Apes Summary & Study Guide includes comprehensive information and analysis to help you understand the book. This study guide contains the following sections:

This detailed literature summary also contains Quotes and a Free Quiz on Planet of the Apes by Pierre Boulle.

“Planet of the Apes” is a science fiction novel by Pierre Boulle, originally published in 1963. The novel has given rise to numerous sequels, reboots, and spinoffs in film and literature. “Planet of the Apes” recounts the tale of Ulysse who takes on an intergalactic expedition to an Earth-like planet near the star sun of Betelgeuse. There, he discovers that humans are mindless creatures and gorillas, chimpanzees, and orangutans are their masters.

When the novel begins, Jinn and Phyllis are sailing through space when they discover a manuscript in a bottle. The manuscript is the testament of Ulysse Merou, part of a French space expedition launched to find life on other planets. The expedition consists of Professor Antelle, a physician named Arhur Levain, and Ulysse himself, an aspiring journalist. They arrive on an Earth-like planet in the Betelgeuse system, after a voyage of two years. They name the planet “Soror”.

There, they are stunned to discover white-skinned human beings living totally naked like animals in the forest. These humans cannot speak and do not have any recognizable human customs apart from sexual activity. They have no reason, and act only by instinct. Ulysse is particularly taken with a gorgeous young girl whom they nicknamed “Nova”. She appears more inquisitive and approachable than her fellows. She appears to take a liking to Ulysse.

The following morning, Nova’s colony of humans is thrown into disarray. Ulysse is stunned to see gorillas, armed with rifles and nets, rounding up dozens of humans. Levain is gunned down trying to escape. Ulysse, Nova, and Antelle are all captured. Ulysse and Nova are taken to the Institute of Advanced Biological Study, to be tested, studied, and experimented upon like lab rats.

The wing in which Ulysse finds himself is run by an open-minded chimpanzee named Zira. He speaks to her, doing his best to distinguish himself from the other humans, but she and her assistants only assume he is imitating them. They put Nova in his cage, compelling him to have sex with her to study human mating habits. Only when he grabs Zira’s notebook to draw pictures and mathematical diagrams does Zira realize she is truly dealing with a man from another planet.

Zira learns French while Ulysse learns the simian language. He learns that the Institute is operationally run by an orangutan named Zaius. He learns that Zira is engaged to a chimpanzee named Cornelius, who studies biology and archeology. Ulysse also learns that primates have ruled Soror for at least ten thousand years. Cornelius and Zira agree that Ulysse should be freed, and would be an asset to the Institute. A plan is formulated where Ulysse will make his own case at the annual scientific congress.

Speaking to all those assembled at the conference, Ulysse earns public support in addition to his freedom. He comes to learn that the entire planet is ruled by a single government, and that racism among simians legally does not exist, though the three primary groups of primates – gorillas, orangutans, and chimpanzees – do not always get along as well as they should. Ulysse frequently struggles with feeling superior to the humans, and feeling compassion for them as they undergo sometimes horrifying tests in the name of science and medicine.

Cornelius later reveals the direction of his research. He believes that monkeys did not simply evolve into intelligence, but copied an older, more advanced civilization. It is later determined that this civilization consisted of human beings. When Nova gives birth to a baby boy who is able to cry, Zira and all the others are stunned. Word leaks out. Public opinion changes. Primates worry that Ulysse is going to father a race of intelligent people. Word comes that the Grand Council of Soror is going to have Ulysse, Nova, and their baby either killed or incapacitated. Cornelius and Zira, acting on moral principle, will not be a party to it. They help the family of humans escape to their spaceship.

As the novel closes, Jinn and Phyllis have a difficult time believing such a story is true. They are chimpanzees.

Planet of the Apes from BookRags. (c)2022 BookRags, Inc. All rights reserved.