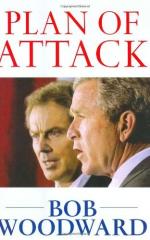 Bob Woodward
This Study Guide consists of approximately 68 pages of chapter summaries, quotes, character analysis, themes, and more - everything you need to sharpen your knowledge of Plan of Attack.

This detailed literature summary also contains Topics for Discussion and a Free Quiz on Plan of Attack by Bob Woodward.

Plan of Attack examines the 18 months of planning and rhetoric that went into Operation Iraqi Freedom, launched March 19-20 in 2003. Inconclusive data on Saddam Hussein's possession of weapons of mass destruction (WMD) and intention to put them at the disposal of the al-Qaeda terrorist network are used by the Bush Administration to justify the war. They claim that the initiative is their last alternative in removing a Hitler- or Stalin-like menace from the world.

Eleven months into his presidency, George W. Bush orders his Secretary of Defense, Donald Rumsfeld, to prepare for war with Iraq as phase 2 in his worldwide war on terrorism. Rumsfeld tasks General Tommy Franks, with radically rethinking the existing war plan, essentially unchanged since the 1991 Gulf War, successfully prosecuted by Bush's father, President George H. W. Bush and a U.N.-sanctioned coalition. Removing the unstable and sadistic Saddam Hussein had not been an objective in the earlier conflict, but now is the sole objective.

Rumsfeld's team works feverishly, steadily refining the plan, shortening the length of preparation required and the size of the ground forces involved. The planning is successfully kept quiet, and as the media catch wind of unusual activity in the Pentagon, Bush dodges questions, claiming (truthfully but dishonestly) he has no plan on his desk. Bush wants Saddam out, but is more cautious than his hawkish and persuasive Vice President, Dick Cheney, who serves as Secretary of Defense during the 1991 war. Secretary of State, Colin Powell, who serves as chairman of the Joint Chiefs of Staff during the Gulf War and prepares the war plan, pleads that war be truly a last resort, but not be under-planned, under-manned, or in any way vulnerable if undertaken. Lacking the personal rapport with Bush that the hard-liners enjoy, Powell is at a disadvantage.

As Tim leads a team of CIA operatives in northern Iraq, Bush's war cabinet searches for a casus belli, a reason for attacking Iraq that the world community will accept. Saddam is unpopular and feared even in the Muslim world, having massacred minority Kurds and Shiites in Iraq and thumbed his nose at the U.N. by expelling inspectors who verified that he destroyed all weapons of mass destruction (WMD) developed and used in the past. Cheney mentally links Saddam's WMD capability with al-Qaeda's track record for terrorism, and, despite the CIA's evidence, turns it into a fact. Bush buys into the syllogism and elevates his rhetoric, proclaiming an "Axis of Evil" exists among Iraq, Iran, and North Korea. Congress, as it had in 1991, authorizes use of force against Iraq and Bush's conservative base demands swift action. Propriety and international pressure demand the U.S. make an effort at finding a diplomatic solution, however, and Powell is tasked with presenting the case before the Security Council, resulting in Resolution 1441. The two-stage process begins with the return of U.N. inspectors to Iraq to determine if Saddam has complied with previous demands. If he hasn't, there must be debate with the U.N.'s response. Cheney is chagrined and Bush's patience wears out. Tim, meanwhile, has succeeded in penetrating Saddam's security and military organizations, allowing Franks' final plan to be swifter and more effective.

With limited international support (Britain, Australia, Spain, Poland, Bulgaria, and - covertly, Saudi Arabia) and massive opposition (France, Germany, and Russia), Bush gives Saddam an ultimatum to leave Iraq or face war. Tim's resources pinpoint Saddam's location and Bush orders an air strike to decapitate the regime, moving the launch of war up. Saddam survives the attack, but the campaign advances swiftly with Iraqi forces melting away, and he is eventually captured. No WMD are found in Iraq and the postwar insurgency is far more determined than expected. As the reasons for going to war are questioned, Bush "circles the wagons" to prevent the truth from ruining his chances of re-election in 2004.

More summaries and resources for teaching or studying Plan of Attack.