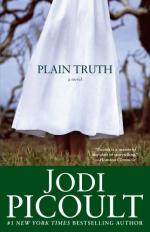 Jodi Picoult
This Study Guide consists of approximately 49 pages of chapter summaries, quotes, character analysis, themes, and more - everything you need to sharpen your knowledge of Plain Truth.

This detailed literature summary also contains Topics for Discussion and a Free Quiz on Plain Truth by Jodi Picoult.

Plain Truth is a novel about an Amish girl who finds herself in the center of a murder trial and the lawyer who comes to her rescue. Katie's background makes it difficult to believe she would do something so heinous as kill her innocent newborn son, but the evidence seems to point in that direction. Despite her personal revulsion to what Katie has done, Ellie Hathaway takes her case as a favor to their shared aunt. Through the course of the trial, Ellie and Katie become friends and through each other begin to see certain truths about themselves that help them to find happiness in their lives that seemed impossible to achieve. Plain Truth is a novel of love, trust, and honesty that will touch the hearts of all who read it.

A baby is found dead inside the barn of an Amish dairy farm. At first it seems to be a run of the mill assignment, but the detective quickly finds inconsistencies in the statements of the family who live on the farm. When the teenage daughter of the farmer appears to be suffering the after affects of giving birth, despite her denials, the detective smells murder. The girl is quickly treated at a local hospital and arrested when medical evidence proves she is the mother of the infant.

Ellie Hathaway has just finished the biggest case of her life. However, instead of being excited about this fact, Ellie feels sick. Ellie no longer finds satisfaction in defending guilty clients. Not only this, but Ellie is no longer satisfied with her lover, either. Ellie decides to leave town for a time, to give herself the space she needs to decide where her life should go from this point on. Ellie goes to the countryside to visit her aunt. However, moments after her arrival, Ellie's aunt becomes embroiled in a private family tragedy. When Ellie learns that a cousin she did not even know she had has been accused of murder, she immediately refuses to become involved. However, Ellie cannot let her favorite aunt down and quickly finds herself not only defending this girl, but becoming her babysitter as well.

Ellie moves in with the Fisher family in order to protect their daughter, Katie, from spending the time before her trial in jail. Ellie is not happy about this situation at first because their way of life is so drastically different from her own. However, Ellie quickly adjusts. At the same time, Katie is struggling with her memories of the night the baby was born, swearing to all who will listen that she never had a baby. Ellie calls in an old friend, Coop, who is a psychiatrist to help her decide if she can defend Katie with an insanity plea. Through Coop's sessions with Katie he is able to help Katie admit that she did have a baby, but he cannot get Katie to admit to harming the child. Ellie uses this information to begin her insanity plea.

Through the course of preparing for the trial, however, Katie convinces Ellie that she cannot use insanity as a defense. Katie has been raised to always tell the truth and by hiding behind insanity, Katie feels she would be lying. Ellie agrees to change her defense. However, Coop continues to come out to the farm on a regular basis and he and Ellie rekindle a relationship that once almost led to marriage. Ellie finds happiness in her relationship with Coop, but is still afraid to allow him to love her, something that ended their relationship twenty years before. When Ellie discovers she is pregnant in the middle of the trial, this only further complicates her relationship with Coop.

Ellie puts on the best defense she can for Katie, including presenting evidence that the baby's death might have had natural causes due to an infection Katie could have gotten from drinking the raw milk on her family's dairy farm. This information so upsets Katie that she decides she must testify despite Ellie's objections. To Ellie's further horror, Katie gets on the stand and confesses to murdering her baby. However, Ellie finally realizes it is the testimony of the medical expert that has caused Katie to do this, because if drinking the contaminated milk killed her then she considers the death to be her fault.

The jury remains in deliberations for so many days that both Ellie and the prosecutor become anxious. The prosecutor finally makes a deal that Katie accepts, leaving her sentenced to a year on monitored probation. Katie's life has basically been restored to normal with this plea. Ellie, who suffers a threatened miscarriage, finally agrees to marry Coop. Everything seems to have been wrapped up satisfactorily except the truth behind the baby's death. The day Ellie prepares to leave the farm, Sarah, Katie's mother, confesses to Ellie. Sarah had known that her husband would never accept Katie's baby and Sarah also knew she could not survive losing her last remaining child. Sarah did what she thought she had to do to save her child.

More summaries and resources for teaching or studying Plain Truth.