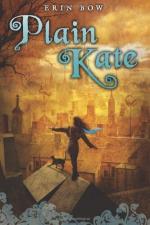 Erin Bow
This Study Guide consists of approximately 22 pages of chapter summaries, quotes, character analysis, themes, and more - everything you need to sharpen your knowledge of Plain Kate.

Plain Kate is a novel by writer Erin Bow. Plain Kate is about a young orphan girl who is accused of being a witch because of her talent in wood carving. Plain Kate takes up with a man who claims to be a witch and wants to take her shadow from her. When Plain Kate finds herself forced to move on, she agrees to trade her shadow for some food and other items she needs in order to travel safely. Plain Kate then learns that the witch plans to use her shadow to seek revenge for his sister's death and bring the sister back to life. Plain Kate is a story of strength, of love, and of loneliness that will leave the reader in tears by the final page.

Plain Kate's mother dies when she is born, leaving her to be raised alone in her father's care. A carver, Plain Kate's father raises his daughter to be a master carver. However, many people are frightened of those who can use a knife to make beautiful carvings, and they call them witches. For this reason, Plain Kate is often accused of being a witch even though she has no powers to speak of. When her father dies, Plain Kate finds herself alone without anyone who cares about her. Plain Kate begins to live in her father's stall, sleeping in a small drawer and raising a small group of kittens for the company.

One day a strange man comes to town. Plain Kate thinks he is a witch, but the people of the town do not seem frightened of him. However, when the man bewitches a bunch of fish so Plain Kate can catch them and then the town's fish are burned, people again begin to look to Plain Kate as a danger. One night, someone takes an ax to Plain Kate's stall. For this reason, Plain Kate decides it is time to move on. Plain Kate makes a deal with the witch, Linay, to give him her shadow in exchange for some things she will need in order to make her escape.

When Linay takes Plain Kate's shadow, he gives her a wish. Plain Kate's remaining cat, Taggle, begins to speak. The local baker, Niki, then takes Plain Kate to the Roamers, a group of gypsies, who agree to allow her to travel with them. While traveling with the Roamers, Plain Kate befriends the young daughter of a witch who was burned and drowned in the city of Lov. Plain Kate admits to this girl, Drina, what she has done with the witch. Drina, who has learned some magic from her mother, decides to help Plain Kate. However, her first spell goes badly. Drina decides she should look for help in the next town they come to, Toila.

In Toila it is important for Plain Kate to sell many of the charms she carves called objarka so that the Roamers can see that she can help pay her way and they will allow her to stay. However, when Drina goes in search of information to help Plain Kate, she is identified as a witch by some locals and attacked. Plain Kate manages to get her away from the angry mob and notify her father. Plain Kate is taken back to the Roamer camp where her fate is debated all night. When the husband of her beloved sponsor, Daj, falls ill, Plain Kate's fate seems to grow dire.

Plain Kate is brought before the Baro and he sees she has no shadow. Frightened, the Roamers put Plain Kate in a cage. Then, when another of the Roamers falls ill, another throws a burning lamp on Plain Kate. Plain Kate escapes to the river. Linay finds Plain Kate and heals her wounds. Then Linay asks Plain Kate to give her blood to help him in exchange for the return of her shadow. When Plain Kate learns, however, that Linay is responsible for the hundreds of people falling dead in their wake and plans to destroy an entire city, she runs away in an attempt to find a way to stop him.

When Plain Kate reaches the city, she learns that Linay plans to sacrifice himself for his sister. Plain Kate fights to stop him, but nearly fails. Finally Plain Kate knows the only way to stop Linay is to kill her beloved cat, Taggle. Plain Kate does this. Linay dies and gives life briefly to his dead sister, Lenore. However, Lenore's return is brief, but in return for Plain Kate's sacrifice she gives Taggle back his life.

More summaries and resources for teaching or studying Plain Kate.