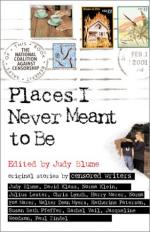 +Chapters Summary and Analysis
Censorship: A Personal View by Judy Blume
A Letter from Joan Bertin, Executive Director, National Coalition Against Censorship
Meeting the Mugger by Norma Fox Mazer
Spear by Julius Lester
Going Sentimental by Rachel Vail
The Red Dragonfly by Katherine Paterson
July Saturday by Jacqueline Woodson
You Come, Too, A-Ron by Harry Mazer
The Beast Is In The Labyrinth by Walter Dean Myers
Ashes by Susan Beth Pfeffer
Baseball Camp by David Klass
Love and Centipedes by Paul Zindel
Lie, No Lie by Chris Lynch
Something Which is Non-Existent by Norma Klein
A Tribute to Norma Klein by Judy Blume
Characters
Objects/Places
Themes
Style
Quotes
Topics for Discussion
Order our Places I Never Meant to Be: Original Stories by Censored Writers Study Guide

Judy Blume
This Study Guide consists of approximately 61 pages of chapter summaries, quotes, character analysis, themes, and more - everything you need to sharpen your knowledge of Places I Never Meant to Be.

The National Coalition Against Censorship receives calls about censorship and provides information, advice and resources to educate the public about the importance of free speech through the newsletter they publish four times annually. Many people do not understand the First Amendment; they want to protect the material they like but not necessarily what others like. Joan points out that not much would remain if everyone could veto what they do not like. Those who oppose censorship believe that reading is a way for young people to safely explore and understand things. Kids need to learn how to deal with controversial issues, but censors focus on what they believe is acceptable for kids to read at school.

(read more from the A Letter from Joan Bertin, Executive Director, National Coalition Against Censorship Summary)

More summaries and resources for teaching or studying Places I Never Meant to Be: Original Stories by Censored Writers.

Places I Never Meant to Be: Original Stories by Censored Writers from BookRags. (c)2021 BookRags, Inc. All rights reserved.