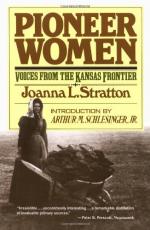 This detailed literature summary also contains Topics for Discussion and a Free Quiz on Pioneer Women: Voices from the Kansas Frontier by Joanna Stratton.

PIONEER WOMEN: VOICES FROM THE KANSAS FRONTIER recounts the history of frontier life in Kansas in the latter half of the nineteenth century. Intent on providing a platform for the forgotten voices of the past, this historical account is interwoven with excerpts from personal correspondence, diaries, and memoirs from some of the ordinary women who struggled through frontier life first-hand.

The Kansas-Nebraska Act of 1854 lured many settlers to the Kansas Territory with the promise of cheap land. Water, timber, and good land were oftentimes hard to come by; those who couldn't build a log cabin had to make do with sod houses made with bricks carved from the very land itself. Fire, tornadoes, floods, droughts, blizzards, and even grasshopper infestations were constant sources of worry and strife on the plains. Native Americans, bullied and tricked by government land treaties in a perpetual effort to push them west, sometimes rebelled and turned violent, offering one more danger for the frontier family.

Corn was the chief crop and the staple of the frontier diet. Cow and buffalo manure, called chips, was the primary source of fuel for fires. Men generally worked the fields, managing to plow the hard Kansas earth with a large breaking plow, along with hunting; women generally tended to the household chores, including sewing, laundering, and cooking. However, conventions such as this were sometimes thrown out the window in a pinch, and many women hunted, farmed, and otherwise took over traditionally male responsibilities. Gender equality and opportunities for women were in fact one of the fortunate consequences of frontier life.

Opportunities for women could be found firstly in education. The poor salary of teachers discouraged men from taking such jobs, and so women became the chief educators of the frontier's growing population of children. Church was also an opportunity for women to escape from home chores and take a leadership role in the community, with the organization of bake sales, sewing circles, and other such fundraisers to build or improve the town church, not to mention charity work.

Kansas was also one of the most progressive states in the nation when it came to the political power and activity of women. Temperance united women politically across the state. Suffrage, though not conferred upon women at the state or federal level until 1912, was granted relatively early at the city level, and Kansas can boast of the nation's first woman mayor, among other accomplishments at the local level.

All in all, the hardships of frontier living in Kansas, especially for women, were overcome with strength, determination, and an abiding faith in God.