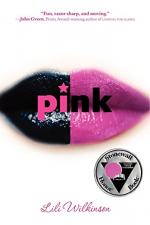 Lili Wilkinson
This Study Guide consists of approximately 46 pages of chapter summaries, quotes, character analysis, themes, and more - everything you need to sharpen your knowledge of Pink.

This detailed literature summary also contains Quotes and a Free Quiz on Pink by Lili Wilkinson.

The following version of this book was used to create this study guide: Wilkinson, Lili. Pink. Harper Collins, 2009. Kindle.

In Lili Wilkinson's Pink, Ava narrates the story of her senior year in high school. Her parents were professors at the Melbourne University who met at the feminist-socialist-anarchist collective. They encouraged her not to conform to a heteronormative gender identity. Ava used to love the color pink and wearing dresses, but they had talked her out of it by junior high. Ava met Chloe in ninth grade and was enraptured by her beauty and mystique. She and Chloe became friends, and then Chloe told her she was a lesbian, they kissed, and started a relationship. Exceedingly progressive and liberal, Ava’s parents threw her a party when she came out as gay. But after spending a few years hanging out with Chloe and her artistic friends who liked wearing black, drinking coffee, smoking cigarettes, and discussing obscure film and works of literature, Ava came to terms with the fact that she did not fit in with Chloe or the other lesbians she knew. Rather than discussing these feelings with Chloe or her parents, Ava was ashamed of her feelings. She bought a pink cashmere sweater and hid it in her closet, and then secretly applied to the preppy private school, Billy Hughes. She told Chloe that her parents were making her go, and told her parents that she only wanted to go to make sure she got into a good college. But really, Ava wanted to try on a new personality where she would wear pink, dedicate herself to a rigorous academic program, and date boys.

Ava started Billy Hughes and was overwhelmed with how beautiful, intelligent, and kind all the students were. Alexis, the beautiful leader of the most popular group in school, the Pastels, befriended Ava right away and helped her adjust to all her new classes and expectations. For the first time in her life, Ava was not the smartest person in the room, and she felt disappointed by herself. Alexis asked Ava to sit with her and the other Pastels at lunch. They asked Ava if she was in a relationship, and Ava said no. They said they would set her up with Ethan, a handsome and popular boy, and Ava was excited about the idea. The Pastels told Ava to join the musical so they could all hang out together, and Ava agreed. Over the weekend, Ava hung out with Chloe on Saturday, and then ditched her on Sunday to hang out with Alexis. On Monday, Ava tried out for the musical, but totally messed up her audition. Mr. Henderson told her he would never let her act in the play, and she ran out crying. She saw the stage crew kids, or “Screws,” goofing around in the courtyard and decided to sign up.

Ava went down to the Undercroft and met the Screws: Sam, Jen, Jules, Kobe, and Jacob. She thought they were weird and nerdy, and ignored them for most of the day, but they invited her out for lunch and she started to warm up to them. She was jealous of how they all fit in with one another, and she wished she could care so little about what other people thought about her. She continually argued with Sam, who she found arrogant and annoying. As the weeks went by, Ava met Ethan and started flirting with him. She opened up to Sam about how she was exhausted with trying to please everyone. He told her she was a screwup, just like them, and revealed that he was nearly failing math. She offered to tutor him. When they went to his house to work, she was shocked to see that he lived in a mansion. His mother was aloof and cold, and Sam said that she was going to send him to boarding-school if he did not pass. He invited Ava to see a band, but she told him she was going to a party at Miles’ house with Alexis. Sam got upset and told her that Alexis was only acting like her friend because Ava made her look better in comparison. Ava left, upset, and went to the party. She felt as if no one wanted her there, and questioned whether or not Sam was right. Ethan danced with a popular girl named Poppy, but when she went to the bathroom he started dancing with Ava. She kissed him, to see what it felt like. She went home alone, feeling more confused than ever.

Ava decided she needed to kiss Ethan again to know for sure if she liked boys or not. She also decided that she wanted to set up Kobe with Jen, even though Sam warned her against it. One night, she went out with the Pastels and Ethan, and Chloe caught her alone with Ethan. Ava managed to keep the situation from blowing up, and told Chloe that she had simply been out with a group of friends. Chloe came over and gave her tickets to see a band they both loved, but Ava said she could not attend because it was on opening night of the musical. Chloe left, upset, and then Ava got a call from Sam, who said their stage crew advisor, Dennis, had died. They went to the train station “Dennis” and decorated it in his honor, then stole the “Dennis” sign as a keepsake.

Ava continued trying to get Jen to date Kobe, but then Jen told her that she was a lesbian. Alexis had been her best friend, but when Jen came out to her, Alexis had cut her off. Ava brought Jen to the hip café where Chloe liked to hang out in order to introduce her to a few lesbians, but Chloe was there and she said cruel things about Jen that made her leave in tears. On preview night, Ava started to notice feelings between her and Sam, but was not sure what to make of them. Before she could figure them out, Chloe arrived at intermission and all of Ava’s lies came bubbling up to the surface. Everyone left without her, and she felt devastated and alone. She went to a party and kissed Ethan again, but decided she did not like him. In the morning, she told her mother everything, and her mother encouraged her to right her wrongs. Ava first went to Chloe’s and apologized, then they officially broke up. Then Ava got all of the Screws to come to a twenty-four-hour science fiction movie marathon with her and Alexis. Over the course of the marathon, everyone thawed toward one another. When Ava came to the undercroft to take down the sets, all of the Screws were there, wearing pink to let her know she was a part of their group. Ava cried with joy and then went outside to find Sam. He told her he liked her, and she said maybe she liked him too, but she was too confused about herself to be more than friends. He said that was okay, and then rolled up his jeans and showed her the pink socks he was wearing.

More summaries and resources for teaching or studying Pink.