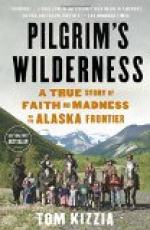 Pilgrim's Wilderness: A True Story of Faith and Madness on the Alaska Frontier - Chapters 14 - 16 Summary & Analysis

Tom Kizzia
This Study Guide consists of approximately 31 pages of chapter summaries, quotes, character analysis, themes, and more - everything you need to sharpen your knowledge of Pilgrim's Wilderness.

In Chapter 14, A Quiet Year

It is now 2005 and the author has taken some time off following his wife’s death from cancer. The Pilgrims have moved their belongings to their new property across the river and become very quiet, so they have essentially disappeared from people’s conversation when Kizzia learns that state troopers are looking for Robert Allen Hale. He has been indicted by a secret grand jury on 30 felony counts of kidnapping, assault, coercion, incest and sexual assault, but when the troopers arrive to apprehend him, he has vanished.

This chapter retraces the months prior to Papa’s indictment. Joseph and Joshua, age twenty-seven and twenty-five respectively, were sent to a hunting camp and being alone together for the first time, began to talk openly about their father. They also privately expressed interest in the daughters of...

More summaries and resources for teaching or studying Pilgrim's Wilderness: A True Story of Faith and Madness on the Alaska Frontier.

Pilgrim's Wilderness: A True Story of Faith and Madness on the Alaska Frontier from BookRags. (c)2020 BookRags, Inc. All rights reserved.