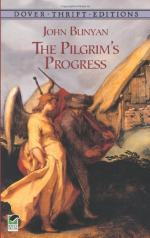 The Pilgrim's Progress is a work which looks backward to earlier traditions and ahead to the work of later writers. The specific traditions it exemplifies are those of the allegory and the homily (sermon). Placing allegorical action within a dream is a standard device, dating from the Middle Ages. The long tradition of the homily was a part of Bunyan's experience, both through the popular homily books that were widely available and in his own sermons.

Bunyan also anticipates the techniques of later English novelists, such as Daniel Defoe and Charles Dickens, in his use of satire, domestic humor, and caricature.

Bunyan's allegorical characters live for the reader through the same emphasis on a single quality that establishes many of the humorous and eccentric characters in eighteenth and nineteenth century fiction.

Although there are elements of the fairy tale and romance in The Pilgrim's Progress, the...