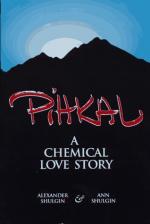 Alexander Shulgin
This Study Guide consists of approximately 30 pages of chapter summaries, quotes, character analysis, themes, and more - everything you need to sharpen your knowledge of Pihkal.

This detailed literature summary also contains Topics for Discussion and a Free Quiz on Pihkal: A Chemical Love Story by Alexander Shulgin.

This book is a slightly fictionalized account of how the two authors—Alexander and Ann Shulgin—begin their relationship, marry and continue to live with another. However, the love story in this book is not just between two people but also involves a class of psychedelic drugs known as phenethylamines. It is the fictionalized versions of Alexander and Ann—Shura Bordorin and Alice Parr, respectively—and their journeys on these drugs that give the book its name Pihkal, which is an acronym that stands for "Phenethylmines I have known and loved."

The book starts from the point of view of Shura. Shura describes growing up in Depression Era Berkeley. Shura graduates early from high school and earns a scholarship to Harvard. However, Shura quickly drops out of Harvard to join the navy and take part in World War II. Once out of the navy, Shura earns a PhD from University of California Berkeley and goes to work for the Dole Chemical Company. Once there, Shura begins to synthesize psychedelic drugs and is largely left to his own devices. Shura decides to leave Dole Chemical in the mid 1960s and quickly begins synthesizing the drugs on his own farm. In 1977, Shura's wife dies, which Shura sees as freeing in many ways as the marriage had become largely loveless.

The story switches to Alice's point of view at this point, and she explains her first experience with psychedelic drugs when she takes peyote in the late 1950s. Alice explains that she is twice divorced and has four children. Alice meets Shura at a meeting organized by her ex-boyfriend. Shura explains that he is in love with a married woman in Germany named Ursula. Alice decides to pursue Shura anyway, and the two make love at a party at Alice's house. Shura still wants to be with Ursula, and Ursula continues to promise to come to live with Shura in California, but Alice decides to stay with Shura until that time comes. Eventually, Alice writes a letter to Ursula asking her to either come to stay with Shura or set him free. Ursula sends a letter to Shura informing him that she will not be coming to California to live. Shura asks Alice to come live with him on the farm, and they are married on July 4, 1981.

At this point, the chapters alternate between Shura and Alice's voices. These chapters mainly chronicle different psychedelic experiences taken by either or both Shura and Alice. In the most powerful of these experiences, Alice experiences a spiritual crisis for almost an entire week brought on by an inert level of a drug. In another, Shura experiences feelings of near omnipotence. In the final chapter, Shura gives a lecture to his university class explaining why the war on drugs should be ended.

More summaries and resources for teaching or studying Pihkal: A Chemical Love Story.