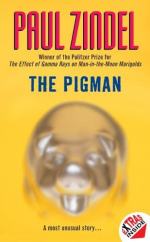 Introduction & Overview of The Pigman

Paul Zindel
This Study Guide consists of approximately 62 pages of chapter summaries, quotes, character analysis, themes, and more - everything you need to sharpen your knowledge of The Pigman.

The Pigman Summary & Study Guide includes comprehensive information and analysis to help you understand the book. This study guide contains the following sections:

This detailed literature summary also contains Bibliography and a Free Quiz on The Pigman by Paul Zindel.

Paul Zindel's first novel, The Pigman, published in New York in 1968 by Harper & Row, is a story of two dispossessed young people who find a surrogate parent in Angelo Pignati, an Italian man who has never had children and whose wife is dead. He shares his humor and joy in life with them, and in his presence, they are allowed to be carefree and childlike in a way that they can't be with their own families.

The novel is considered by many critics to be the "first truly [young adult] book," according to Teri Lesesne in an interview with Zindel in Teacher Librarian. When Zindel wrote the book, he realized that few books depicted teenagers dealing with real problems in the modern world. He also talked to many teenagers who said they hated to read or had been branded as troublemakers, and he targeted his story to them. Zindel's honesty and humor "broke new ground, and prepared the soil" for many excellent young adult books to come, according to Lesesne.

In an interview with Scholastic students, Zindel said that he was inspired to write the book while he was house-sitting in a fifty-room "castle" on Staten Island. A teenage boy trespassed on the grounds, and when Zindel went out to yell at him, he found out that the boy was actually a very interesting person. The character of John Conlan in The Pigman was modeled on this young man. The character of Lorraine was modeled on a student in one of the chemistry classes Zindel taught. He told the interviewer, "I thought, what a wonderful adventure it would be to team those two life models for me into a story in which they met an eccentric, old mentor figure."

The Pigman from Gale. ©2005-2006 Thomson Gale, a part of the Thomson Corporation. All rights reserved.