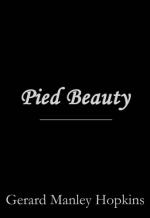 Gerard Manley Hopkins
This Study Guide consists of approximately 27 pages of chapter summaries, quotes, character analysis, themes, and more - everything you need to sharpen your knowledge of Pied Beauty.

This book provides an accessible introduction to Hopkins’s poetry in the light of his prose writings, which are used to illuminate Hopkins’s thinking on nature, prosody, language, philosophy, science, and theology, as well as his ideas on inscape and sprung rhythm.

In his translation of the epic Anglo-Saxon poem, the Irish poet Seamus Heaney has preserved the alliterative and rhythmical patterns and the profusion of kennings that characterized the original. The poem tells the story of the warrior Beowulf and his battles with three monsters.

Muller examines Hopkins’s life, writings, and spirituality in the context of a newly industrialized, anti-Catholic, and increasingly secular England. She shows how...

More summaries and resources for teaching or studying Pied Beauty.