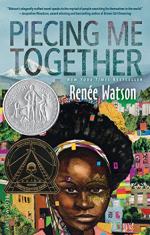 Piecing Me Together Summary & Study Guide

Renée Watson
This Study Guide consists of approximately 56 pages of chapter summaries, quotes, character analysis, themes, and more - everything you need to sharpen your knowledge of Piecing Me Together.

Piecing Me Together Summary & Study Guide includes comprehensive information and analysis to help you understand the book. This study guide contains the following sections:

This detailed literature summary also contains Quotes and a Free Quiz on Piecing Me Together by Renée Watson.

The following version of the book was used to create this study guide: Watson, Renee, Piecing Me Together. Bloomsbury YA, New York, New York, 2017. Kindle AZW file.

Jade is a junior at St. Francis High School, an exclusive school for wealthy students where the study body is predominately white. She is black and attending on a scholarship, and she is constantly struggling against the stereotypes and prejudices that are prevalent in the world.

As the novel opens, school is starting and Jade is certain she will be granted the opportunity to participate in a program that allows students to travel abroad. She is called in to talk to the school's guidance counselor shortly after school begins and is surprised that they are not talking about that trip. Instead, Jade is asked to join Woman to Woman, a program that pairs a successful adult woman with an at-risk teenage girl. Jade is disappointed and is on the verge of turning down the program when the counselor says she will be given a scholarship if she completes the program. Though Jade hates the idea that she is seen as an “at-risk” student who needs this sort of program, she agrees to participate because of the scholarship.

Jade's mentor, Maxine, does not show up for the first program meeting, but later makes a point to introduce herself to Jade. At the next program meeting, Maxine spends the entire time on the telephone with her former boyfriend, leaving Jade to wander around ar art museum on her own. Over dinner, Jade tells Maxine that she feels she is being short changed. She had envisioned a different kind of relationship forming between them. Maxine realizes that Jade is right, and she makes more of an effort to spend quality time with Jade. She invites Jade to her house for dinner, but Jade soon feels that Maxine had simply been trying to prove to her mother that she was doing something worthwhile. Jade considers dropping out of the program, but her mother says that Jade will not find another way to pay for college, and she insists that Jade “work it out.”

Jade decides she has to begins standing up for herself. She points out that most of the girls in the group want more practical advice, rather than spending an entire evening talking about dating. Group organizers listen, and they begin focusing on how to manage money and spend time with a young black woman who talks about the steps she took to open her own art gallery.

When a young black girl is brutally beaten by police who were called for a noise complaint, Jade and many others are outraged. However, Jade discovers that most of the students at St. Francis have not even heard the story, though it happened just a few miles away. Jade is instrumental in organizing an event to raise money for the girl's medical bills, and she is happily surprised with the number of people who support the event.

As the novel comes to a close, Jade is learning she has the power to stand up for herself and it feels good to do so. She also learns she has the ability to overcome the stereotypes against blacks and that she has to make a commitment to see anything through to the conclusion, including friendships.

More summaries and resources for teaching or studying Piecing Me Together.

Piecing Me Together from BookRags. (c)2022 BookRags, Inc. All rights reserved.