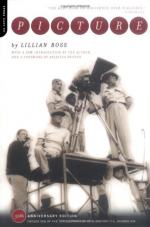 Lillian Ross
This Study Guide consists of approximately 36 pages of chapter summaries, quotes, character analysis, themes, and more - everything you need to sharpen your knowledge of Picture.

This detailed literature summary also contains Quotes and a Free Quiz on Picture by Lillian Ross.

The following version of this book was used to create the guide: Ross, Lillian. Picture. The New York Review of Books, 1952.

In her journalistic account, Picture, Lillian Ross decides to follow John Huston and Gottfried Reinhardt's work converting Stephen Crane's The Red Badge of Courage to the screen. So in love with Crane's novel, Huston is energized by the idea of transferring the Civil War story into cinema. He convinces his colleague and friend Reinhardt to produce the film with him. Both men are significantly established in the industry, and are therefore confident they can make the film a success despite obvious obstacles.

As they work to convert the novel to a script, the studio voices their concerns about The Red Badge. Executives like L.B. Mayer of MGM believe the picture will have no story and will therefore make no money. Though these opinions worry Reinhardt, Huston assures him The Red Badge will be a sensation. They eventually receive the backing of MGM vice-president Dore Schary, an effervescent and vivacious character. His support further encourages the director and producer.

After much frustration, Huston finally decides to shoot the film on his ranch in the San Fernando Valley. Ross travels with the crew to Huston's home on the coast to prepare for rehearsals. They plot out the best portions of the land to use for each battle scene. The men argue throughout about the number of extras the company will allow them, as well as who should play each of the leading roles. Determined not to feature established stars, Huston casts a 26-year-old decorated WWII veteran in the leading role of the Youth.

As the filming commences and progresses, Reinhardt and Huston struggle to stave off despair. They reshoot many of the film's most significant scenes, and make a litany of adjustments to satisfy the concerns of Schary and the rest of the studio. Reinhardt particularly suffers from the stresses of the production, while Huston attempts to maintain a calm demeanor and sustained belief in the project.

Despite many of their colleagues initially positive responses to The Red Badge's test shots, the first three previews go poorly. The audiences respond inappropriately to the film's most significant and emotional moments. The preview cards they fill out after the showings reveal their true disappointment and hatred for the film. Mayer and Schary grow frustrated with the project. Meanwhile, Huston has disappeared overseas, immersed in his new film The African Queen. Reinhardt is left behind to finish The Red Badge production alone, attempting to combat the studio's pressures.

Schary then assumes supervision of the film's final edits, cutting Reinhardt and Huston's favorite scenes, and rearranging the picture's entire narrative progression. Reinhardt writes to Huston in London apologizing for the changes, but admitting his frustration with Huston's unresponsiveness and lack of support.

When the film's reviews finally come out, the journals praise Huston's work, while failing to acknowledge Reinhardt's at all. When Huston finally returns to the states, he and Reinhardt attempt to make amends. Even after The Red Badge is released, Ross still feels she is missing some portion of the story. She visits Loew's executives in New York to ask their opinions on The Red Badge production. The men tell her Schary, Reinhardt, and Huston were foolish to make the picture at all. They believe art has no place in cinema, that their business is entertainment.

More summaries and resources for teaching or studying Picture .