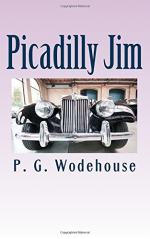 Wodehouse, P. G.
This Study Guide consists of approximately 44 pages of chapter summaries, quotes, character analysis, themes, and more - everything you need to sharpen your knowledge of Picadilly Jim.

The following version of this book was used to create the guide: Wodehouse, P G. Piccadilly Jim. Prabhat Prakashan, 2017.

The narrator follows the lives of the Petts and the Crockers, two wealthy families connected by the wives. Mrs Pett and Mrs Crocker are estranged sisters but find their lives intertwined again due to the antics of Mrs Crocker’s stepson, Jimmy Crocker.

Mrs Crocker had been left a fortune from her late husband. She met her current husband, Bingley Crocker, on a cruise. Mrs Pett had not approved of the marriage, believing Mr Crocker to be after her sister’s money. Due to this, the sisters had not spoken since the engagement and Mrs Crocker had moved from New York to London. Having found himself with a lot of money and not much to do, Jimmy Crocker spends his time partying and getting into trouble. His antics are reported in the London papers as well as his old employer, the Chronicle, in New York. Mrs Pett insists that she and her husband go to London to bring Jimmy home and put him to work to avoid further scandal. They bring along Mr Pett’s niece, Ann Chester and Mrs Pett’s spoilt son, Ogden. Ann met Jimmy five years ago and holds a grudge against him for ridiculing her poetry in his paper. Jimmy, feeling dejected after a night of partying and a publicized brawl, bumps into Ann, saving her from a taxi. Neither recognize each other and Jimmy is entranced by her. He follows her and overhears her condemnation of him. Questioning his lifestyle, Jimmy buys a ticket to sail to New York. While buying the ticket he again sees Ann and realizes she does not know who he is and tells her his name is Bayliss.

In New York, Jimmy continues his ruse, pretending to be someone else in order to win Ann’s affection. He denies he is Jimmy to a friend that sees him dining with Ann. He pretends as though he must have a remarkable likeness to Jimmy Crocker. Jimmy discovers Ann’s plan to kidnap the spoiled Ogden and take him to a farm for overweight and badly behaved dogs. He suggests he impersonate Jimmy Crocker to insert himself into the Pett mansion to help her with her plan. He comes across the Pett’s new butler, Skinner, who happens to really be his father, Mr Crocker. The homesick Mr Crocker had pretended to be a butler in London while the Pett’s were visiting and decided to accept the job offer Mr Pett had made. Jimmy also encounters a man posing as Lord Wisbeach who he later discovers in really named Gentleman Jack, there to steal an invention of Mrs Pett’s nephew, an explosive called Partridgite. The fake Lord Wisbeach tells Mrs Pett that Jimmy is an imposter and Mrs Pett hires a detective, Miss Trimble. Ogden approaches Jimmy, believing he is there to kidnap him and wants to be involved in the scheme so he can make money. Jimmy convinces his father along with Mr Pett’s physical trainer, Jerry Mitchell to kidnap Ogden.

On finding out the real identity of Lord Wisbeach and his engagement to Ann, Jimmy tells him he must leave. He later confronts Lord Wisbeach while he is stealing the Partridgite from the safe just as Miss Trimble foils Ogden’s kidnap attempt, catching Mr Crocker with Ogden. The noise causes the other residents of the Pett mansion to come to the scene. Jimmy realizes he must now reveal that he truly is Jimmy Crocker to Ann. On finding this out, she is at first appalled but shortly after agrees to marry him, believing that only someone as badly behaved as him deserves someone as difficult as her.

More summaries and resources for teaching or studying Picadilly Jim.