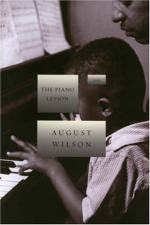 August Wilson
This Study Guide consists of approximately 60 pages of chapter summaries, quotes, character analysis, themes, and more - everything you need to sharpen your knowledge of The Piano Lesson.

Morales, Michael. "Ghosts on the Piano: August Wilson and the Representation of Black American History" in May All Your Fences Have Gates: Essays on the Drama of August Wilson, edited by Alan Nadel, University of Iowa Press, 1994, pp. 105-15.

More summaries and resources for teaching or studying The Piano Lesson.

The Piano Lesson from Gale. ©2005-2006 Thomson Gale, a part of the Thomson Corporation. All rights reserved.