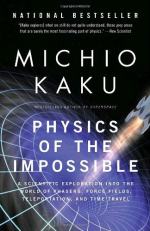 Physics of the Impossible: A Scientific Exploration Into the World of Phasers, Force Fields, Teleportation, and Time Travel - Part II: Chapters 11-13 Summary & Analysis

Michio Kaku
This Study Guide consists of approximately 22 pages of chapter summaries, quotes, character analysis, themes, and more - everything you need to sharpen your knowledge of Physics of the Impossible.

In Chapter 11, Kaku states that traveling faster than the speed of light has often been a founding principle in science fiction but he also claims that it may be possible. Kaku discusses Einstein the Failure and his eventual turnaround and development of the Theory of Relativity. Also included are loopholes in Einstein's Theory.

Kaku compares the Alcubierre Drive to the propulsion system used in Star Trek. Alcubierre states that the ability of the enterprise to travel it works speed is one of the things that encouraged his research.

Wormholes and Black Holes are addressed as a possible way to break the light barrier. Kaku also discusses Planck Energy and Particle Accelerators.

He quotes Stephen Hawking, 'If time travel is possible, then where are the tourists from the future?' (Chapter 12, p. 216).

Time is considered to...

More summaries and resources for teaching or studying Physics of the Impossible: A Scientific Exploration Into the World of Phasers, Force Fields, Teleportation, and Time Travel.

Physics of the Impossible: A Scientific Exploration Into the World of Phasers, Force Fields, Teleportation, and Time Travel from BookRags. (c)2021 BookRags, Inc. All rights reserved.