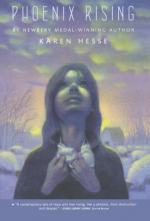 Karen Hesse
This Study Guide consists of approximately 66 pages of chapter summaries, quotes, character analysis, themes, and more - everything you need to sharpen your knowledge of Phoenix Rising.

Cynthia D. Grant was born in Brockton, Massachusetts and eventually moved to California where she attended high school in Palo Alto and where she still lives. She is married and has one son. Grant says of herself, "I have always written. I have to write.

Sometimes it's the most fun thing in the world; other times, I feel like chucking my typewriter out the window."

Grant likes to compare herself to an "empath," a Star Trek character who is able to take others' suffering on herself: "If acid scorched your face, she absorbed your pain so completely that her own face was scarred."

"Why did [the empath] make such a mark on my mind?" Grant asks. "Because I emphathized with the empath.

I, too, felt like an alien. A lot of what I saw going on around me made no sense. The world appeared...

More summaries and resources for teaching or studying Phoenix Rising.