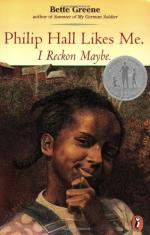 Bette Greene
This Study Guide consists of approximately 29 pages of chapter summaries, quotes, character analysis, themes, and more - everything you need to sharpen your knowledge of Philip Hall Likes Me, I Reckon Maybe.

This detailed literature summary also contains Topics for Discussion and a Free Quiz on Philip Hall Likes Me, I Reckon Maybe by Bette Greene.

Philip Hall Likes Me, I Reckon Maybe, tells the story of eleven-year-old Beth Lambert who is a bright and capable girl and has a giant crush on Philip Hall, "the cutest boy in school". Beth's mother realizes that her young daughter is very bright and has a lot of promise and warns her against filling her head up with thoughts of Philip instead of concentrating on school work. Beth is thrilled that Philip strums his guitar for her when she comes over to his family's dairy farm every evening after school to do his chores. Beth often wonders to herself if she is number two to Philip's number one at school because she holds back due to her feelings for him. By the end of the story, she knows the answer to that question.

Reality hits when Beth is not invited to Philip's birthday party. Beth is no shrinking violet and confronts Philip about this effrontery. He tells her that he could only invite boys to his party because if he invited girls, the other guys would tease him. Beth points out that as president of the Tiger Hunters Club, it is strange that he has no fear of tigers—which he will never in a zillion years confront in rural Arkansas—yet he is afraid of girls and being teased about them. Beth gets her point across and Philip tells the other Tiger Hunters members that if they show any fear of girls they will henceforth be known as 'fraidy cats instead of tiger hunters.

The two youngsters are drawn to each other yet both have a competitive streak that often puts them at odds. Philip helps Beth build a vegetable stand and helps her sell produce. She scolds him for eating some of the inventory and for the stand being nearly destroyed by his dairy cows. They both head their team in a challenge relay race that never takes place because Philip gets lost in the woods. It is through Beth's ingenuity and observant nature that she is able to rescue him. Despite their frequent annoyance and frustration with each other and their occasional fits of anger, their friendship endures.

The grand finale of the year covered in the book is the 4-H club competition at the county fair. Beth and Philip both enter the young calves they raised in the competition and wind up head-to-head in the final elimination round. When Beth bests Philip and wins the blue ribbon, he tells her that he is not hurt because she won rather because it's not easy to lose. The two friends decide to enter the square-dancing competition as partners and this time will win or lose together.

More summaries and resources for teaching or studying Philip Hall Likes Me, I Reckon Maybe.