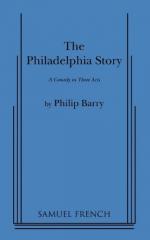 The play opens with an intimate family scene between the long-suffering Margaret Lord and her two daughters, Tracy and Dinah. The three women are busy planning Tracy's wedding to George Kittredge. She is marrying in style, with a pre-nuptial party and a stylish reception for five hundred people.

When Tracy briefly exits, Dinah tells her mother that Dexter is in town. Dinah is clearly fond of Dexter, and seems to regret her sister's divorce. Later in the scene, Dinah telephones Dexter and issues him an invitation to the festivities.

Tracy's impending marriage and her past alliance are discussed in light of the failed marriage of her parents. Tracy despises her father for his poor treatment of her mother, but her mother tends to blame herself. Their disagreement seems to parallel Tracy's attitude towards her own failed first marriage. Was her first husband, Dexter, at fault? Or...