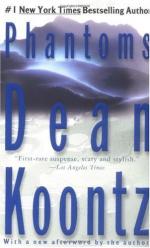 Dean Koontz
This Study Guide consists of approximately 50 pages of chapter summaries, quotes, character analysis, themes, and more - everything you need to sharpen your knowledge of Phantoms.

This detailed literature summary also contains Topics for Discussion and a Free Quiz on Phantoms by Dean Koontz.

Phantoms, by Dean Koontz is a supernatural thriller that details the events that take place in Snowfield, California over a few days. Dr. Jennifer Paige, a resident of the small ski town, and her younger sister Lisa, arrive in Snowfield to discover the population dead or missing. Though Jenny tries to find a reasonable explanation for the situation, the truth of the horror in Snowfield is eventually revealed.

Dr. Jennifer Paige and her younger sister Lisa arrive in Snowfield after the death of their mother. Lisa's introduction to Snowfield is a bit off, however, as the town appears extremely quiet. Jenny agrees, finding things too quiet, and a bit unsettling. The Paige sisters discover the dead body of Hilda Beck, Jenny's housekeeper on the kitchen floor in horrible condition. Jenny struggles to identify what might have caused the woman to die while preparing dinner.

The horrible truth presents itself to the sisters while trying to find a working phone. The entire population of Snowfield is either dead, in the same state that Hilda is in, or missing.

Jenny contacts the sheriff's office in nearby Santa Mira for help and Sheriff Bryce Hammond responds with several deputies to the small ski town. As the police arrive the sisters are in the street, terrified, as the church bells and sirens in the town sound repeatedly in the night. It is clear from the very beginning that whatever is going on in Snowfield is not anything that can be considered normal.

Sheriff Hammond, a man battling tragedies in his own past, calls for the help of the US Army and a scientific team to see what is going on in Snowfield. While waiting for the cavalry to arrive, the group searches Snowfield looking for any sign of survivors. More bodies are discovered, as well as empty houses and a cryptic note written on a bathroom mirror; "Timothy Flyte, The Ancient Enemy."

General Galen Copperfield and his team arrives and begin the painstaking task of trying to figure out what is going on in Snowfield. Bryce Hammond's reports are ignored as the team tries to explain the situation logically, until one of Copperfield's men is taken by whatever creature has been acting in the small town. Copperfield is finally forced to believe that there is something going on that cannot be explained.

It is not long before almost the entire military team, including Copperfield, is killed and consumed by the creature. The survivors gather in the lab and are amazed when the creature begins to communicate with them through the computer terminals. Sara Yamaguchi tries to discover what is causing the horrors in the town and why, but is rebuffed. The creature simply wants Timothy Flyte in Snowfield.

Once in town, Flyte is quickly pulled into the horror when the creature decapitates Frank Autry in front of the group. Flyte's desire to examine the creature up close is granted, and in one of the labs the group discovers that tissue separated from the main body for too long will die. Sara Yamaguchi also discovers the base of the creatures composition and arranges to have Biosan-4, a chemical that destroys oil slicks, delivered to the town.

The group discovers that Biosan-4 does indeed destroy the tissue of the creature and a battle takes place on the main street of Snowfield as the survivors fight for their lives. Flyte dies at the hands of the creature, betrayed by the man it considered its biographer. Tal, Bryce, Jenny and Lisa survive and are finally able to leave the town behind them, though not their troubles.

Fletcher Kale, a man who Bryce had arrested for the murder of his wife and young son in order to get access to the son's trust fund, is in the woods outside of Snowfield. Having escaped from jail, Kale heads to the cabin of the dead deputy, Jake Johnson, in order to hide and plan. At the site of the cabin, Kale discovers the cave where he hoped to hide is now inhabited by Gene 'Jeter' Terr, the head of the local motorcycle gang, and a strange pulsating blob. Kale is thrilled to accept Jeter's explanation that the creature is Lucifer and they are its apostles.

The recovering survivors are confronted with one more horror as Jeter and Kale arrive at Santa Mira hospital to kill them, following the orders of the creature as it retreated from Snowfield. The man are killed, unsuccessful in their attempt and the four survivors as well as Hammond's son Timmy, are safe.

Bryce and Jenny are married the following year, accepting the good that has come out of the horrible events that took place in Snowfield. Though Jenny is still cautious, wondering what will come when and if the Ancient Enemy should return, she accepts the happiness that she has found and plans to live her life, embracing the world around her and cherishing those she loves.

More summaries and resources for teaching or studying Phantoms.