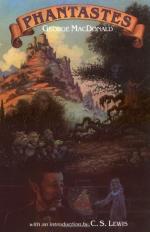 George MacDonald
This Study Guide consists of approximately 42 pages of chapter summaries, quotes, character analysis, themes, and more - everything you need to sharpen your knowledge of Phantastes.

This detailed literature summary also contains Topics for Discussion and a Free Quiz on Phantastes by George MacDonald.

Anodos is a twenty-one-year old man who embarks on a journey through Fairy Land. His journey takes him through a fantastic world where he meets a variety of people and creatures that teach him lessons about growing up. Anodos learns to throw off the whims of childhood, humble himself for the sake of others, and exert self-control. Anodos' tale is one of rebirth and growth as he reaches adulthood and takes control of his late father's estate.

Anodos receives a set of keys which open up his deceased father's secretary desk. Inside the desk is a hidden compartment that reveals a small woman claiming to be his grandmother. The woman tells Anodos that she will grant his subconscious wish to visit Fairy Land. His reason for entering the fantastic world is unknown until the very end of the book. He went hoping to find his Ideal. Instead he loses his Shadow and overcomes the childish ways of his past in order to move forward into his new future as head of his father's estate.

During his journey Anodos is immersed in a world of imaginative places and unbelievable people. He is guided along the way by various people. An old woman and her daughter introduce Anodos to the forest and give him an initial set of warnings. Once he leaves their protection, Anodos soon forgets all their admonitions and travels through the forest guided by his own whims. Anodos must make restitution for the wrongs he commits before he is able to learn the path back to his own world.

Anodos falls hopelessly in love with a woman imprisoned in stone. He sets about freeing her through song, but when she quickly disappears from sight, he searches furtively for her. His pursuit of the woman and lack of discernment between real and contrived appearances lead him into the clutches of an evil Ash tree. He is rescued by an unseen hand, which he later learns belongs to a Knight. Anodos encounters the Knight several other times during his travels. The Knight has had his own share of hard times and is now working to remedy the wrongs he committed.

Anodos continues to pursue the White Lady from the stone. He visits numerous people along the way. At the home of an ogre he manages to set free his Shadow. The Shadow is the embodiment of his childish ways. Now Anodos must seek to triumph over his dark side and locate the White Lady. He finally frees the White Lady from her imprisonment only to find that her lover is the Knight. However, by the time Anodos realizes this, he has come to love each of them separately and is overjoyed at their union.

Anodos joins forces with two brothers in order to save their kingdom from three giants. He appears to have found a home among the brothers, but it is short-lived. He survives the battle with the giant, but the brothers do not. Anodos cannot stay at this spot in Fairy Land. His journey must continue until he finds the way back out of Fairy Land.

Anodos faces two other battles on his quest. The first has already been hinted at: the conquering of his Shadow. This event is anti-climatic in scope but important to Anodos' maturation. The other battle is one of self-sacrifice. Anodos saves the Knight from temptation by evil forces. In the process he looses his life but gains re-entry to his own world. Anodos returns to the real world not because he dies, but because he learns the principles necessary for being a successful adult.

More summaries and resources for teaching or studying Phantastes.