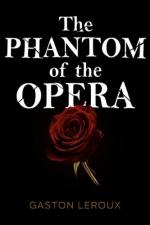 Gaston Leroux
This Study Guide consists of approximately 28 pages of chapter summaries, quotes, character analysis, themes, and more - everything you need to sharpen your knowledge of The Phantom of the Opera.

In his entertaining 1993 novel The Canary Trainer, Nicholas Meyer, writing as Sherlock Holmes's confidant Dr. Watson, has Holmes interact with characters from Leroux's novel, as he tries to capture the opera ghost.

There are many comparisons to be made between the story of the phantom and Mary Shelley's 1818 novel Frankenstein, which also deals with an outcast from society. In Shelley's novel, though, the philosophical questions of what it means to be human are much more significant.

The costume ball with the mysterious death's head figure in attendance is an almost exact copy of the scene Edgar Allan Poe used in his short story "The Masque of the Red Death." This story is available in most anthologies of Poe's works, including the one published by the Library of America.

Readers who enjoy Leroux's style might want to read more of his...

More summaries and resources for teaching or studying The Phantom of the Opera.

The Phantom of the Opera from Gale. ©2005-2006 Thomson Gale, a part of the Thomson Corporation. All rights reserved.