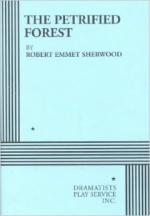 Robert E. Sherwood
This Study Guide consists of approximately 44 pages of chapter summaries, quotes, character analysis, themes, and more - everything you need to sharpen your knowledge of The Petrified Forest.

Personalities surface as the gangsters keep the diner employees and patrons captive. Gramp continues to talk as if he's hosting important guests; Boze is contentious seeing the captivity as a threat to his manhood; Alan is resigned as he is to everything; and Gabby doesn't seem phased. The radio reports Duke's gang's recent killing spree and warns residents to be on guard. The gang members congratulate each other on their recent success and continuing notoriety.

In an attempt to ingratiate himself with the gangsters, Gramp tries to talk to Duke about the gang's plans. Ultimately the captives learn that Duke is waiting on a few more gang members and Duke's girlfriend to arrive as the diner had been selected as the designated meeting place.

Alan has been steadily drinking rye and Boze challenges his ability to pay for it. Gabby admits to giving...

More summaries and resources for teaching or studying The Petrified Forest.

The Petrified Forest from Gale. ©2005-2006 Thomson Gale, a part of the Thomson Corporation. All rights reserved.