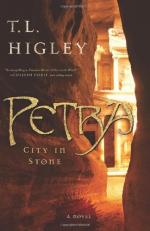 T. L. Higley
This Study Guide consists of approximately 52 pages of chapter summaries, quotes, character analysis, themes, and more - everything you need to sharpen your knowledge of Petra.

Told from multiple perspectives, Petra: City of Stone is the story of a mother's struggle to save her young son from the clutches of an evil queen amidst the war waged between good and evil, Heaven and Hell.

Set in Petra in the year AD 106, the novel opens with Julian rushing to the amphitheatre to save the lives of his friends and his fiancé. This group of individuals has been discovered to be Christians, and the Roman government has ordered their deaths in the arena, mauled to death by lions. Julian, whose father is a powerful Christian senator, should have been executed along with his friends, but his family name saved his life. When Julian fails to save his friends, and when he realizes that his actions have brought disgrace and danger to his family, he runs away from Rome to the city of Petra. Meanwhile, a young mother, Cassia, and her son, Alexander, make plans to leave their hometown of Damascus. Cassia's husband is an abusive, dangerous man who uses his family in schemes to swindle traders out of their money. When one swindle turns bad and Aretas is killed, Cassia knows she has nowhere to turn but to Aretas' mysterious family in Petra. Although she knows nothing about her husband's family, she hopes that they will be kind enough to take them in, providing a future for her son.

When Cassia arrives in Petra, she is befriended by an elderly man, Malik, and his group of friends. Malik places his hands on Cassia, healing an injury she sustained, through the power of prayer. Cassia learns that Malik is a spiritual leader in Petra, running an underground Christian church, teaching believers about Jesus Christ. In Petra, as in Rome and many other cities across the world, Christianity was a new religion - Jesus had been crucified less than 100 years earlier - and anyone found to be Christian was thought to be going against the royal house and was executed. But Malik and his congregation risked persecution and death to worship their Lord and Savior, Jesus Christ. It is Malik and his friends who inform Cassia of Aretas' true parentage in Petra: he was the crowned prince of the city, and next in line to rule the entire Nabatean empire. With Aretas dead, this means that Alexander, Cassia's young son, is next in line to inherit the throne. Cassia is rocked by this news, and hopes that this means both she and her son will have a secure future in the palace. But Cassia does not know that King Rabbel, Aretas' father, has remarried a dark, evil woman with plans of her own to rule the country. After struggling with fertility, Queen Hagiru has aligned herself with the evil gods of the underworld in exchange for the birth of a healthy son. King Rabble is old and sick, and Hagiru knows that her son, Obadas, is too young to rule the kingdom alone, and that she will be appointed his regent, ruling in his stead. When Cassia and Alexander arrive at the palace gates, Hagiru's plan for power is foiled.

Hagiru manages to convince the king to take Alexander into the palace, but to throw out Cassia, who has no legal claim to her son now that he has been discovered to be the royal prince. As time passes, Hagiru convinces Rabbel that in order to keep Petra out of Roman clutches - Rome has been encroaching on the city, ready to invade and conquer the capital in the name of Rome - the gods demand a blood sacrifice: Rabbel's grandson, Alexander. When Cassia learns of this, she and her friends at Malik's church device a plan to steal Alexander from the queen's evil clutches, and to return him to Cassia's arms where he belongs. During the time that Cassia has been staying with Malik, she meets and falls in love with Julian, whom Malik is training to take over his church in Petra. Cassia is terrified of falling victim to another powerful man, so she fights against her emotions toward Julian, and does everything she can to keep him at arm's length. Her inability to trust also prevents her from fully engaging in Julian's plans to rescue Alexander, and she is nearly killed in the process of defying him. The whole while, Malik and Julian work diligently to show Cassia the light of Christianity, and to convince her that Jesus Christ is her God, and that He would never leave her or forsake her. In the climax of the novel, Cassia is locked in the queen's cellar for trying to rescue Alexander, is physically beaten and emotionally broken, when she has a vision of the Lord walking with her beside a quiet stream. She lets his love and dedication flow through her, filling her with a new strength and new sense of trust. Cassia escapes from the dungeon and meets with the Roman leader, convincing him that she will hand over Petra to Roman rule, if he promises to take the city peacefully, without any bloodshed.

With the city of Petra safe, Cassia can once again return her focus to rescuing Alexander from the sacrificial offering set to take place that evening. She makes her way to the altar, prepared to fight with the Holy Spirit beside her, in the name of the Lord to rescue her son. Meanwhile, Malik, Julian, and the rest of the church followers congregate at the bottom of the mountain where the altar is set, and wage war against the demons and dark forces that have too long controlled Petra. The angels from Heaven descend to Earth to aid in the battle, and in the end, love is victorious. When the Roman soldiers arrive, Hagiru makes one last attempt to kill them, and the soldiers are forced to stab her through the stomach, knocking her onto the altar which immediately ignites in flames. At the end of the novel, Cassia is reunited with her son Alexander who, after Rabbel's untimely death, is named sole heir to the throne of Petra. Cassia ensures that Petra is peacefully handed over to Rome. Through Cassia's acceptance of Jesus Christ's love for her, she is able to love others in turn, and builds a life with the only man she's ever truly loved, Julian. Peace descends on Petra, and all the pains of the city have been washed away by the merciful grace of the Lord Jesus Christ.

More summaries and resources for teaching or studying Petra: City in Stone.