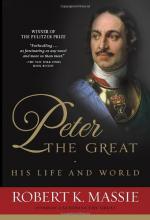 Peter the Great: His Life and World Summary & Study Guide

Robert K. Massie
This Study Guide consists of approximately 50 pages of chapter summaries, quotes, character analysis, themes, and more - everything you need to sharpen your knowledge of Peter the Great.

Peter the Great: His Life and World Summary & Study Guide includes comprehensive information and analysis to help you understand the book. This study guide contains the following sections:

This detailed literature summary also contains Topics for Discussion and a Free Quiz on Peter the Great: His Life and World by Robert K. Massie.

Robert K. Massie's PETER THE GREAT: HIS LIFE AND WORLD examines how a larger-than-life force of nature turns medieval Muscovy into modern Russia by force of arms, importation of talent, and harsh discipline.

Born in 1672, with little chance of attaining the throne of Muscovy, Peter finds himself at age ten reluctantly accepting popular acclamation as Tsar and soon reigning jointly with his chronically ill half-brother, Ivan V. Peter spends little time in the Kremlin, tainted for him by watching his relatives slain by the Streltsy in 1682, preferring to learn military science and European lifestyles. Shipbuilding and seamanship become his passion. Peter marries to sire an heir but is soon estranged from Eudoxia. Peter continues to play while the Regent Sophia rules and Ivan handles necessary pomp.

Yearning for the sea, Peter begins visiting Archangel and contemplates invading the Black Sea. He builds warships at Voronezh, twice attacks the Turkish fortress at Azov, builds a harbor, and dispatches a diplomatic mission. Having dealt a final blow to the Streltsy, Peter sends a "Great Embassy" to Europe, traveling himself incognito as Peter Mikhailov. He observes, questions, collects, and recruits to build a new Russia. Back home, Peter allies with Augustus II, of Poland to start a war with Sweden's Charles VII, that lasts twenty years. Initial confrontations show the Russian army ill-trained and equipped, so Peter begins drafting men and raising grinding taxes. He seizes Lake Ladoga and the length of the Neva River, too and begins building forts in the marshy delta. Swiftly a new capital, St. Petersburg, to Peter paradise, rises. The war grinds on to the Swedish defeat at Poltava, which allows Peter to concentrate on his domestic reforms of government bureaucracy, commerce, and the church .

Peter revisits Europe, including France, looking for allies in a shifting political situation. The long battle of wills between Peter and his heir, Alexis, comes to a head as the Tsarevich flees Russia but is found. Obsessed about traitors, Peter uses torture to determine the scope of Alexis' threat and condemns his son to torture and death. Alexis dies begging his father's forgiveness and blessing. Physically an old man by age 52, largely thanks to a lifetime of heavy drinking, Peter crowns his second wife Elizabeth as Empress, with the assumption that she will succeed him. He dies in agony of gangrene, begging God's forgiveness for his many sins in recognition of all of the good he has tried to do for Russia.

More summaries and resources for teaching or studying Peter the Great: His Life and World.

Peter the Great: His Life and World from BookRags. (c)2022 BookRags, Inc. All rights reserved.