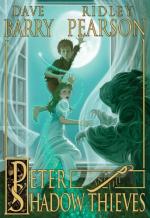 Peter and the Shadow Thieves Summary & Study Guide includes comprehensive information and analysis to help you understand the book. This study guide contains the following sections:

This detailed literature summary also contains Topics for Discussion and a Free Quiz on Peter and the Shadow Thieves by Dave Barry.

Peter and the Shadow Thieves is a fictional story about an English boy named Peter who helps a secret organization known as Starcatchers escape from the sinister Lord Ombra, the leader of a dark group called The Others. Peter lives on the tropical Mollusk Island, which is inhabited by a band of pirates led by the evil Black 'Stache, also know as Captain Hook, as well as a band of natives called the Mollusks. He lives with four other boys on the island and is constantly accompanied by Tinkerbell, a fairy-like "birdgirl" who, like Peter, has the ability to fly.

Lord Ombra is one of the Others. He is a dark figure with the ability to subdue people by capturing their shadows. Ombra comes to Mollusk Island on a ship captained by the pirate Captain Nerezza looking for a trunk of starstuff that had been brought to the island by Lord Aster, one of the Starcatchers. Finding that Aster has returned to England, Ombra sails back with Peter and Tinkerbell stowing away secretly on board. Once back in England, Peter tries desperately to find Lord Aster and his daughter, Molly, for whom Peter has deep feelings. Meanwhile, on Mollusk Island, Captain Hook captures Peter's friends to use as bait to lure Peter into a trap.

Peter finds Molly Aster, whose father has gone away to the Return without telling anyone where, and whose mother has been kidnapped by Lord Ombra. With the help of a friend of Molly's named George Darling, Peter and the others track down her father to warn him about Ombra, who has discovered the time and location of the Return. In a dramatic scene, Ombra arrives at the Return and is nearly able to steal the trunkful of starstuff, but is foiled by Peter at the last possible moment. Ombra is destroyed in a bright flash of light, and the shadows he has stolen, including that of Molly's mother, are returned to their owners. Lord Aster, who was gravely wounded during Ombra's attack, is magically healed when he is exposed to a small amount of starstuff that Peter keeps in a locket.

With the starstuff safely returned to the heavens, Peter says an emotional goodbye to Molly and returns to Mollusk Island where he successfully assists his friends in escaping from the pirates.

Peter and the Shadow Thieves from BookRags. (c)2022 BookRags, Inc. All rights reserved.