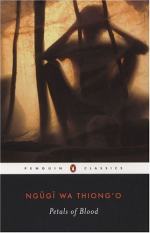 The novels Things Fall Apart (1958) and No Longer at Ease (1960) by the Nigerian writer Chinua Achebe depict Nigeria's experience with colonialism, from first contact with the British to the 1950s.

The West Indian poet Derek Walcott, from whose poem "Swamp" Ngugi takes the title of his novel, discusses the conflict between his loyalties to Africa and to Britain in his poem "A Far Cry from Africa" (1990).

In Ngugi's novel The River Between (1965), Christian missionaries attempt to outlaw the female circumcision ritual and create a rift between two Gikuyu communities, and people are torn between accepting Western and Christian ideas and holding on unquestioningly to their traditional ways. The growing conflict brings tragedy to a pair of young lovers who attempt to bridge the chasm between the people.

A Grain of Wheat (1967) is Ngugi's compelling account of five friends who make...