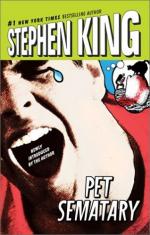 Stephen King
This Study Guide consists of approximately 56 pages of chapter summaries, quotes, character analysis, themes, and more - everything you need to sharpen your knowledge of Pet Sematary.

Pet Sematary, published in 1983, is a fictional exploration of the author's greatest fear. Stephen King has become a much-beloved American author partly due to his ability to tap into primal human fears. Generally his books focus on the universal fears all human beings share of things that go bump in the night. This book, however, delves into the all too realistic fear of losing a loved one, particularly a child. King found himself so frightened by the story he created with Pet Sematary that the reluctant author had to be talked into allowing the novel to be published.

The story centers on Louis Creed, a family man and a doctor who is finally beginning to establish himself professionally. The novel begins as the Creed family moves into their beautiful new home in Ludlow, Maine. Louis has recently accepted a position as head physician at the University of Maine student medical facility. The job, and the two-story New England colonial house, marks his new success and begins an idyllic time for him and his wife, Rachel, and their two children, Ellie and Gage. The day they move in, Louis meets their neighbor, Judson Crandall, who quickly becomes both friend and father figure to Louis. Jud and his wife Norma help the Creeds feel at home in Ludlow. Jud shows them around and helps the family explore the vast boundaries of their property. A path on the edge of the Creed property leads up to a pet cemetery, which has been maintained for years by generation after generation of neighborhood children. The sign marking the place is labeled Pet Sematary in childish printing.

On Louis' first day of work, a student is hit by a car and dies before Louis' eyes. That night, in either a dream or a vision, the student, Victor Pascow, appears to Louis and warns him never to cross the boundary between the Pet Sematary and the Indian woods beyond it. Meanwhile, Jud warns Louis that the road between their two houses is dangerous, and many animals have fallen victim to speeding trucks on the road. This conversation terrifies Rachel, who has a deep-seated aversion to the idea of mortality, developed in childhood as she watched her sister die a long, painful death. When little Ellie Creed's cat, Winston Churchill (Church), is killed on the road a few days later, Louis is afraid to break the news to Rachel and Ellie. Fortunately, they are out of town visiting Rachel's parents. Louis does not accompany them due to the rift between him and his in-laws.

Rachel and Ellie's absence gives Jud the chance to show Louis the real Pet Sematary. Jud instructs Louis to bring Church's corpse along as they cross the boundary from the Pet Sematary into the Indian woods beyond. The path takes them through what the Micmac Indians called Little God Swamp. The journey is perilous, and the swamp feels haunted. They arrive at an ancient Indian burial ground, where Jud instructs Louis to plant the cat. The place has a power all its own, and Louis feels compelled to comply. The next day, Louis is hardly even surprised when Church returns from the dead. The cat smells awful and acts strange, but when Rachel, Ellie and Gage return, no one seems to notice the difference.

When young Gage is run down and killed by a truck in the road one day, Louis decides to make another trip to the Indian burial ground. Jud implores him not to and tells him the story of another grieving father who once buried his son beyond the Pet Sematary. The boy returned as an evil creature. He knew secrets from beyond the grave and used his terrible knowledge to threaten Jud. The boy's father was finally forced to kill his son and then committed suicide. Louis promises not to bury Gage in the stony ground beyond Little God Swamp, but the place co-opts his free will and lures him back anyway.

Louis sends his family away so that he can exhume Gage from the regular cemetery in town and rebury him in the Pet Sematary. The spirit of Victor Pascow appears to little Ellie in a dream, and she convinces her mother to return to Ludlow to stop whatever awful thing may be about to occur. Rachel races back by airplane and rental car from Chicago while Jud keeps watch from his porch, both of them intent on stopping Louis, although only Jud knows what Louis is up to. The evil power, however, hampers both Jud and Rachel from getting to Louis in time. Louis reburies Gage, and by the time Rachel arrives on the scene, her son is back from the dead and has already killed Jud Crandall. The evil being which now inhabits Gage's body gleefully stabs his mother to death before Louis can stop it. Louis takes morphine from his doctor's bag and puts down the cat as well as his reincarnated son, intending to put an end to the evil once and for all. Yet the power of the place has not let Louis go quite yet. It inspires him to take Rachel's corpse into the woods and bury her there. The end of the novel finds Louis waiting at home for his dead wife to return.