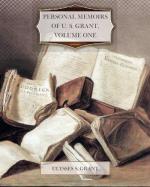 Ulysses S. Grant
This Study Guide consists of approximately 29 pages of chapter summaries, quotes, character analysis, themes, and more - everything you need to sharpen your knowledge of Personal Memoirs of U.S. Grant.

This detailed literature summary also contains Topics for Discussion and a Free Quiz on Personal Memoirs of U.S. Grant by Ulysses S. Grant.

Ulysses S. Grant was born in Pennsylvania in 1822. His father was strict and had definite ideas about many things, including Grant's education. When Grant was a teenager, his father announced that he'd applied to West Point on Grant's behalf and that Grant would be attending college there. Grant didn't want to go, fearing that he might fail, but admitted that he easily passed the entrance examination. He didn't often apply himself to his studies but did complete his education. At the end of his term at West Point, Grant expected to work with the military for a year or two before looking for a position as a teacher. The Mexican War commenced and Grant found himself caught up in it. Grant described aspects of the war, including the political wrangling involved.

As the war came to an end, Grant returned home where his young wife and family had lived without him for most of his married life. Grant tried his hand at farming and worked daily to make a living for his family. He eventually gave up the endeavor and went briefly into the real estate business before moving to become a clerk in his father's general store. Grant was working there when the call came out for volunteers to serve in the Union Army. Based on his previous military experience, Grant was put in charge of a group of volunteers.

Grant believed himself capable of commanding and was soon entrusted with that duty. Grant was promoted twice more over coming months. Though he sometimes struggled with his duties and worried occasionally about being in charge, he took the leadership role seriously. Grant described in details many of the major battles, including the Battle of the Wilderness and the attacks at Shiloh, Vicksburg and Atlanta. Grant spent a great deal of time planning tactics and deciding how to make the best use of the Confederate troops available. The Union Army faced the incredible task of keeping the army fed. Grant issued orders to forage as much as possible from the land and the local farmers. He also established supply lines as the first order of business in every situation.

With the end of the war seemingly inevitable, Grant sent a letter to Lee, urging that the Confederates surrender. Lee responded that he wasn't certain the Southern cause was hopeless, but that he was willing to talk about terms of surrender in order to avoid further bloodshed. When the two military leaders met at Appomattox, Lee was dressed in a new uniform and was carrying an elaborate sword. Grant compared that to his own worn uniform and his unkempt appearance. Lee kept his emotions completely hidden but Grant admitted that he felt depressed.

More summaries and resources for teaching or studying Personal Memoirs of U.S. Grant.