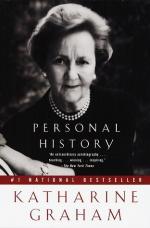 Katharine Graham
This Study Guide consists of approximately 99 pages of chapter summaries, quotes, character analysis, themes, and more - everything you need to sharpen your knowledge of Personal History.

This detailed literature summary also contains Topics for Discussion and a Free Quiz on Personal History by Katharine Graham.

Personal History presents the saga of Katharine Graham, who succeeds her father and husband as publisher of the Washington Post and leads it successfully through the troubled times of Vietnam and Watergate.

Katharine "Kay" Graham is the fourth of five children born to Eugene Meyer, a wealthy investment banker who turns civil servant under presidents Hoover and Roosevelt, and Agnes Meyer, a mentally troubled political and social activist. Eugene leaves government employ when Kay is young and buys the failing Washington Post. Agnes is ill-suited for motherhood and lauds her considerable accomplishments over the children, while Eugene is distant but supportive. Kay excels in school but is socially backward. She muddles through a year of college at Vassar but thrives at the University of Chicago, where she becomes involved in liberal politics. After a year writing for a small San Francisco newspaper, where labor issues are her favorite subject, Kay returns to Washington to work for her father. She meets and marries a promising young lawyer, Phil Graham, and follows him around the country during his army service in World War II. She bears four children and settles into awkward but dedicated motherhood. Phil's powerful personality strips Kay of ambition and self-worth. Kay's father overcomes Phil's reluctance to work for the Post, and Phil, who has only passing knowledge of journalism or business, succeeds Eugene as publisher within six months.

Eugene retires and gives the Washington Post Company to the Grahams, with Phil holding the majority shares. Phil acquires Newsweek and expands the company's media holdings, but he never gets over feeling he is just a son-in-law. Phil drinks heavily and suffers mood swings, but his manic depression is not diagnosed or treated. He becomes a close confident of John Kennedy and, even more so, of Lyndon Johnson, and he is instrumental in their 1960 election as president and vice president of the United States. In the closing days of the Kennedy administration, Phil suffers a breakdown, complicated by a love affair with Robin Webb. The Grahams appear on the brink of divorce, but Phil returns to Kay, is hospitalized but not medicated and manipulates access to a firearm to put himself out of the misery of hurting people.

Kay is thrust into the position of managing a massive operation demanding years of learning to master and great efforts to overcome the inferiority her mother and husband have implanted in her. Under Kay's direction, the Post frees itself from toady support of Johnson's Vietnam policy, inciting the Texan's wrath, and risks the Washington Post Company's very existence by taking on the paranoid and vindictive Nixon administration over the Pentagon Papers and the Watergate Affair in the early 1970s. The Post becomes a nationally and internationally recognized publication, and its publisher is cast ever more into the uncomfortable public spotlight. Kay establishes a coterie of famous and influential friends. Billionaire friend Warren Buffet provides Kay a hands-on education in business, helping her see the Post through a long wildcat strike in 1976. Thereafter, Kay concentrates on strategic growth for the company and begins gradually turning over the paper and later the company to son Don Graham, who has been groomed for the task of keeping the paper in the family. Freed of day-to-day responsibilities, Kay concentrates on travel, educating the underprivileged and writing her memoirs, which serve to free her of the past and look forward to whatever old age brings. Throughout the book, Kay gives credit to the talented people who work for her and underplays the role of pioneering businesswoman for which she is repeatedly, and appropriately, honored.

More summaries and resources for teaching or studying Personal History.