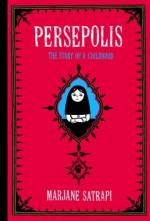 Persepolis: the Story of a Childhood Essay

Marjane Satrapi
This Study Guide consists of approximately 29 pages of chapter summaries, quotes, character analysis, themes, and more - everything you need to sharpen your knowledge of Persepolis.

In the following excerpt, Freund discusses how Satrapi uses her book and comic strip as a form of retaliation against the strict Iranian norms she grew up with.

As of 2005, Satrapi is at work on an animated adaptation of Persepolis for French television.

A teenager's rebellious night on the town, if the town was Tehran in its early days under the mullahs, meant a trip to Kansas. That was a burger joint on Jordan Avenue, a place where the city's upscale sons and daughters set the tone and controlled the culture. Kansas was a redoubt of available coolness, a place where you could hang out, slouch west, and of course risk arrest.

Kansas and its burgers have achieved a certain degree of world fame now, along with other small-scale, dally-life efforts by Tehran's teens to squirm beyond the control of the regime's vice police. That renown comes...

More summaries and resources for teaching or studying Persepolis: the Story of a Childhood.

Persepolis: the Story of a Childhood from BookRags. (c)2022 BookRags, Inc. All rights reserved.