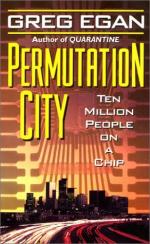 Permutation City is a science fiction novel that takes place in the middle of the 21st century. Computer and medical technology have advanced to the point that it is possible to scan a person's brain and create a computer program that runs a complete copy of that person on a computer server, giving them something close to life after death. Because of the great expense, the process is mostly limited to those who can afford to pay for indefinite computing resources.

Paul Durham is an insurance salesman who offers protection plans to these wealthy copies. In 2050, Durham begins quietly promising virtual immortality to several wealthy copies in a virtual world called Permutation City. This city will exist independent of the world's limited computing resources and will never be in danger of shutting down. Durham bases his apparently impossible claim on his theory that the universe is constructed of random bits of information drawn from different times and places and put into a recognizable order by an observer. According to his theory, all he needs to do is design a "Garden of Eden" city with all of the structure and copies present and run it for a few seconds of computer time after which it will become a complete alternate universe, capable of running itself forever by building more and more computer clusters within its own universe.

Durham enlists the help of Maria Deluca, a freelance software programmer he hires to design a prototypical planet using a program called Autoverse which models chemical, physical and biological actions. He intends to run the planetary program parallel to Permutation City as an experiment to see if intelligent life can evolve completely within the Autoverse.

Durham launches the city and discovers his theory is correct. After 7,000 years living in the city, Durham awakens Maria's copy which she has reluctantly sent into the city. The planet she designed, called Lambert, has developed an intelligent form of life, an insect-like creature that thinks in swarms. Durham and Maria try to contact the intelligent creatures, who do not believe their story of having been created by a program.

Permutation City is put in danger when the Autoverse portion of the universe begins to corrupt the Permutation City program and recreate it according to the Lambertians theory of reality. Durham hurriedly creates a copy of the city and its residents and launches a new Garden of Eden city. In an last-minute effort to save one of the residents of the city, Durham and Maria are left behind and at the last moment launch themselves into a new universe together.