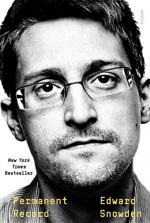 The following version of this book was used to create this study guide: Snowden, Edward. Permanent Record. Macmillan, 2019.

Permanent Record is a memoir by Edward Snowden detailing his childhood, his years working as both a contractor and a government employee within the CIA and NSA, and the build-up and fallout of his decision to go public with his concerns about the nature of a secret mass surveillance system he discovered during his time working in the Intelligence Community (IC).

Part 1 is about Snowden’s childhood and early adulthood. Snowden developed a love of computing thanks to his dad’s interest in computers and video games. When his dad bought their first ever home computer Snowden became obsessed with going on the internet to the point that his grades suffered. Snowden became unwell for an extended period of time after his parents’ divorce and was told he would have to repeat a year of high school. Unwilling to do this, Snowden enrolled instead in Community College. Snowden began working for a fellow student who lived on Fort Meade with her husband. Snowden was evacuated from Fort Meade on 9/11. The 9/11 attacks inspired Snowden to join the army, but he was seriously injured during his training and given an administrative discharge. He decided he should use his technical abilities to serve his country instead and applied for security clearance which he received at the age of 22.

Part 2 covers Snowden’s career working for the CIA and NSA as both a contractor and a government employee. Snowden found his initial jobs within the IC unfulfilling and decided that he would rather serve the CIA abroad which involved him training to be a Technical Information Security Officer (TISO). During his training Snowden made a formal complaint to the administration on behalf of his classmates about the poor accommodation facilities provided for the trainees. After the complaint was ignored, he took the complaint further up the chain of command without permission. Snowden believes the first job he was given as a TISO was punishment for his complaints as a trainee.

Snowden began work as a TISO in Geneva, Switzerland. He recounts his involvement with human intelligence gathering by helping a CIA agent to identify and attempt to recruit a Saudi Arabian banker as an informer. When the attempted recruitment failed, a colleague working in digital intelligence told Snowden that next time they should not bother trying to recruit a person of interest, but should instead just make sure to get their email address. Snowden did not understand the implications of this comment at the time.

Snowden’s next job took him to Tokyo, Japan. After being asked to fill in for a colleague at a conference at the last minute, Snowden discovered information about mass surveillance that began to make him suspicious about the US government’s behavior. He went searching for information to confirm his suspicions but could not find the report he was looking for. Later, he chanced upon the report he had been looking for by accident as part of his usual work duties. Snowden returned to America where he was diagnosed with epilepsy.

Part 3 deals with the events leading up to Snowden’s decision to go public with his findings and the consequences of this decision for Snowden and his family. Snowden decided to move to Hawaii with his girlfriend, Lindsay Mills, because he believed the lifestyle there would better help him cope with his diagnosis. In Hawaii, Snowden came to the conclusion that it was his duty as a public servant to expose the unconstitutional behavior of the government in its creation of a system of mass surveillance that was not subject to proper Congressional or judicial oversight. Snowden smuggled information out of his workplace by hiding an SD card under a square of a Rubik’s Cube.

Snowden arranged to meet with several journalists in Hong Kong. When the journalists published his revelations, the story became a worldwide scandal. With the assistance of WikiLeaks founder Julian Assange, Snowden was offered asylum in Ecuador. However, during his journey to Ecuador, Snowden was stranded in Russia when the US revoked his passport while he was mid-flight. Snowden was eventually afforded political asylum in Russia.

The penultimate chapter of the memoir publishes extracts from the diary of Snowden’s girlfriend, Lindsay Mills. Mills’ diary recounts being followed and interrogated by the FBI in the aftermath of Snowden’s revelations, despite her knowing nothing about his plans or actions in advance. Mills later moved to Russia to reunite with Snowden. They have been married for two years.