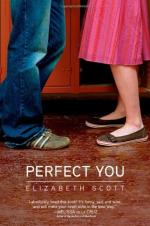 Elizabeth Scott
This Study Guide consists of approximately 28 pages of chapter summaries, quotes, character analysis, themes, and more - everything you need to sharpen your knowledge of Perfect You.

One of the primary themes running through the novel is relationships. The novel reveals that even the individuals that make up a family have different relationships among the family members. For example, Todd and his father have a closer relationship than Todd and his mother. Kate doesn't seem to be close with either of her parents or her brother.

Friendship is another type of relationship the novel tackles. First, Anna and Kate are best friends. When Anna loses weight and becomes popular, however, she ignores Kate and their friendship fades. Kate tries to be friends with the Jennifers, but realizes that she really doesn't have anything in common with them. Kate continuously tries to mend her friendship with Anna, but eventually realizes that Anna is not a true friend.

Romantic relationships are also tackled in the novel. Kate has a crush on Will and Will has a crush...

More summaries and resources for teaching or studying Perfect You.

Perfect You from BookRags. (c)2022 BookRags, Inc. All rights reserved.