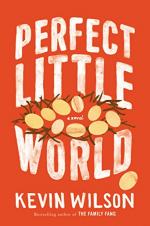 Related Topics
Nothing to See Here
The Family Fang

Kevin Wilson
This Study Guide consists of approximately 40 pages of chapter summaries, quotes, character analysis, themes, and more - everything you need to sharpen your knowledge of Perfect Little World.

This detailed literature summary also contains Quotes and a Free Quiz on Perfect Little World: A Novel by Kevin Wilson.

Perfect Little World is a contemporary utopian novel by Kevin Wilson in which single teenage mother Izzy and her son participate in Dr. Preston Grind’s Infinity Family Project, which aims to broaden the idea of family into something more communal. While a senior in high school, Izzy had an affair with her 30-some year-old art teacher, only to become pregnant by him, and only to have him commit suicide due to mental health issues. His family, wealthy and well-connected, recommends Izzy to the Infinity Family Project (IFP) to prevent further embarrassment for the family.

The IFP is headed up by 30-something Grind, whose own parents were child psychologists who raised him as an experiment rather than a son with the Constant Friction Method, wherein he never had any real stability or peace. Now a brilliant young man, Grind seeks to strengthen and expand the idea of the family as so many marriages and families fall apart. Grind’s ideas catch the attention of aged billionaire Brenda Acklen, who agrees to finance a test version of Grind’s ideas -the ten year-long IFP.

Izzy is interviewed by Grind and accepted into the program before giving birth. She is the youngest and only single parent to participate. Nine other couples and nine other children also participate. While the experiment will focus on communal raising of children so that they view all adults in the project as parents, the experiment will also provide the adults with parenting support and other benefits, such as tuition for schools, help with career advancement, and so on.

As the experiment gets underway, the children develop well. Most are ahead of normal trends for development. The parents, however, have differences that are ultimately overcome for the sake of the project and the children. For example, some parents want religion to be a part of discussions on death, while some even worry about discussing death with children at such a young age at all. However, the sexual affair between two parents from different married couples leads to a breakdown in order, a suicide attempt, and the decision for some of the parents to leave the program three years ahead of schedule. This coincides with Brenda’s death from cancer, and the taking over of the program by her granddaughter who believes that the program is a success despite recent setbacks, and who also fires Grind, as she seeks to grow and expand IFP for profit.

As the test case of IFP winds down, and parents and their biological children return to the world at large, Izzy declares that she has fallen in love with Grind. Grind has also fallen in love with Izzy, but has hidden his feelings for the sake of the project. Grind and Izzy decide they will get married, and Izzy’s son, Cap, is thrilled with this. Izzy herself is immensely happy, and knows she will face the future with a husband and a son who love her. Izzy ultimately comes to co-own a barbecue restaurant, while Grind becomes famous for working with other children raised in the Constant Friction Method.

More summaries and resources for teaching or studying Perfect Little World: A Novel.