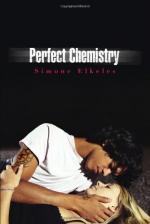 Simone Elkeles
This Study Guide consists of approximately 24 pages of chapter summaries, quotes, character analysis, themes, and more - everything you need to sharpen your knowledge of Perfect Chemistry.

This detailed literature summary also contains Topics for Discussion and a Free Quiz on Perfect Chemistry by Simone Elkeles.

Perfect Chemistry is a novel by bestselling, young adult author Simone Elkeles. In this novel, Brittany Ellis is the daughter of wealthy parents from the right side of town. She appears to be a girl who seems to have it all. Alex Fuentes is a poor Mexican boy from the wrong side of town who became a member of the local gang to protect his mother and two little brothers. When Alex and Brittany are forced to become partners in their chemistry class, they find themselves on a path that will lead both to discover that looks are not all they appear to be. Perfect Chemistry is a romantic novel that is similar to West Side Story, a novel of misunderstandings and miscommunications that work to keep two lovers apart until finally love propels them past all obstacles.

Brittany Ellis has worked hard to appear perfect in order to make her mother happy. However, Brittany is far from perfect. Brittany worries about her older sister, Shelley, a woman trapped in a useless body inflicted with cerebral palsy, because Brittany seems to be the only one who cares what happens to Shelley. At the same time, Brittany has to keep up appearances at school as the captain of the pom pom squad and girlfriend to the football captain. When Brittany if forced to partner with Alex Fuentes in Chemistry, it seems that her dreams of perfect grades and admission to Northwestern will go up in smoke.

Alex Fuentes is the son of a widow. His father was shot when Alex was only six years old during a drug deal. Alex has joined the local Latino Bloods in order to protect his family in his father's absence. However, Alex dislikes the gang life and dreams of someday going to college. When Alex is forced to partner with Brittany Ellis in Chemistry, while his dreams of a good grade are not changed, his reputation seems to be placed in danger when a friend bets him he cannot get Brittany into his bed in two months.

Alex begins to flirt with Brittany, attempting to seduce her so that he will not lose his precious motorcycle in the bet. However, over time Alex begins to realize that Brittany is not as perfect as she pretends to be. In fact, Alex comes to recognize that he and Brittany have a great deal in common in that they both put forth a façade for the world, hiding their true characters. In time, Alex begins to fall in love with Brittany despite her mule faced boyfriend and her wealthy background.

At the same time that Alex begins to get to know Brittany, Brittany discovers the person that Alex is beneath the tough gangster attitude. Brittany tells Alex that she is in love with him, but that she wants to hide their relationship from her friends and family to protect them both from prejudices. However, Brittany quickly discovers that she does not really care what her friends think of her. Brittany shows off with Alex proudly at a local night club, unaware that by taking Alex into rival gang territory she is placing his life in danger.

Even as Alex and Brittany are beginning to find their way to one another and dream of a life together, Alex finds himself drawn deeper into the gang. One of the gang leaders wants Alex to do a drug deal, but he hesitates. It was drugs that ultimately killed Alex's father. On the ngiht of the deal, Brittany seduces Alex to keep him from the deal until his friend Paco can take his place. However, when Alex follows Paco to the drug drop, he discovers it was a trap to kill Alex. Paco is dead and Alex is confronted with his father's killer, fellow gang member Hector. Alex is shot, but Hector is killed when police arrive.

Alex scares Brittany away, afraid of losing her too. However, Alex soon realizes he cannot live without Brittany. Alex quits the gang and lives with the consequences. Alex then gets his GED and is accepted to the same school Brittany has chosen to attend, the University of Colorado. Alex promises to never leave Brittany again and to ask her to marry her when their college education is done.

More summaries and resources for teaching or studying Perfect Chemistry.