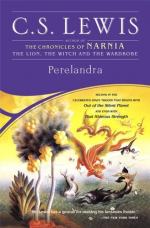 This detailed literature summary also contains Topics for Discussion and a Free Quiz on Perelandra by C. S. Lewis.

Perelandra by C.S. Lewis is the second book of Lewis' Space Trilogy. In this account, Dr. Ransom battles the Dark Force on a new planet, facing the strongest, most destructive force known to man, temptation. The future of all mankind rests in his ability to prevent the Black Archon from causing the downfall of man. In many instances throughout the whole book, we are shown characteristics of the eldila, The Voice, and Maledil that correspond to angels, Christ, and God the Father. There are many parallels to Biblical accounts, both of the fall of mankind and the temptation of Jesus by Satan. The difference in this account is that the object being tempted, The Green Lady, does not succumb as Eve did. She overcomes, as Jesus did, but comes close to falling. Though The Green Lady parallels Eve and Jesus, she is really not the ruler of the land. Neither is her King. There is a Voice that communicates with Ransom from time to time that is parallel to Jesus. The Voice tells Dr. Ransom his name is ransom, also, indicating He is Christ, and Ransom will serve in the same capacity as Jesus did, ransoming the population of Perelandra. Even the doctor's name foreshadows what is to come.

Dr. Ransom previously visited Malacandra (Mars) which, according to the narrator, forever changed him. He met the eldila (angels) and seemed to have an ongoing relationship with them. He has now been ordered to go to Perelandra (Venus) for a purpose he does not know at first, but soon discovers. He prepares for his journey by summoning the narrator and having him help with the journey. The narrator places him in a strange, coffin-like box, and the Oyarsa of Malacandra becomes the emotive force that propels him to Perelandra.

On Perelandra, Ransom floats on a surreal floating island. He soon meets The Green Lady, who is destined to be the mother of mankind. However, she is "young" and must become wise about things to become older. They immediately develop a close friendship. Ransom is nurtured in this utopian, though strange, land. Ransom learns much from The Lady, and in turn teaches her much. Ransom's peace is soon shattered, however, by the appearance of Professor Weston, who arrives in a space ship.

Weston, whom Ransom saw on Mars, appears, is disarmed, and then they begin a lengthy philosophical discussion. During this discussion, Weston reveals he has changed his purpose in life. He is on a quest to find true spirituality, though his idea of what that means differs drastically from Ransom's idea. He reveals his pride when he tells Ransom he is the greatest scientist of all time, and has knowledge and understanding about life no other human can claim. This pride will soon lead to his downfall.

The following morning Ransom awakens to discover the devastation of a beautiful life form on Perelandra. He finds one of the fairy-like frogs he admired just days before, lying ripped open, mutilated, but still alive. He tries to kill it in an attempt to put it out of its misery. He soon finds he causes it further pain, and he is unable to kill it easily. He feels a great sense of disgust and misery at his need to attempt the kill. He soon finds many more of the frogs in the same shape.

Ransom soon finds himself directly opposing Weston when he discovers Weston trying to convince The Lady to move to the Fixed Land, which is forbidden by Maleldil (God). He tries to convince her that obedience sometimes means disobedience. He says The King really wants her to disobey him to show her strength.

Weston soon transforms into a hideous creature Ransom realizes is the Evil One, the Un-Man, as he calls him. The creature has overtaken Weston's body. He battles with the creature, both physically and mentally. The battle starts off as a sort of competition between them for the loyalty of The Lady. It soon escalates into a battle of wills, fighting for their very lives.

Ransom escapes the clutches of the Un-Man, but is soon drawn back into the battle in an attempt to save The Lady. He is approached by The Voice, which is the Maleldil, or God, of Perelandra. He attempts to avoid battling the Un-Man because of his belief that he is too weak. However, The Voice convinces him he is the only hope, the ransom, for all of mankind against the Un-Man.

A battle with the Un-Man ensues, with the two going into darkness, a cavern, a fiery pit, and ultimately, Ransom conquers him and throws him into the fiery pit. He is barely alive and has to stay in the limbo he finds himself in for some time to recuperate. He eventually does get out of the limbo, and goes on to meet Tor, the King, and Tinidril, the Queen. He learns they are to be the beginning of a new mankind and they will one day go to earth and redeem his planet.

Ransom is sealed back into the coffin-like enclosure and transported back to earth. The narrator and Dr. Humphreys are waiting for him, to help him return and to regain his health. He has been gone a whole year.