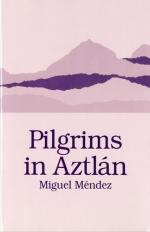 Introduction & Overview of Pilgrims in Aztlan

This detailed literature summary also contains Bibliography and a Free Quiz on Pilgrims in Aztlan by Miguel Mendez.

Miguel Méndez, in his novel Pilgrims in Aztlán, tells many different stories. Heralded as a "landmark in Chicano literature" by critic Roland Walter in the Americas Review, the stories in this novel are hard to read. The difficulties are based on many factors; one of the most prominent is Méndez's creative use of timethere is no straightforward linear progression. Another challenge is keeping track of the long list of characters. A third factor is the subject matter. There is no easy way of reading about the lives of oppressed and constantly hungry people. Underneath all this, there is also another factor. Juan D. Bruce-Novoa, in his article "Miguel Méndez: Voices of Silence," states that

Méndez never trusts the lazy reader who would take
advantage of the novel to amuse himself without
committing anything in return. Méndez is not interested
in entertaining [the reader] but moving [the
reader] emotionally to compassion and intellectually
and socially to action. In another respect, as in all rituals,
complexity and even confusion are codes hiding
and protecting the secrets of a culture from the
outsider.

Another way that Méndez protects the secrets of his culture is to write only in Spanish. In addition, his complex writing style makes translating his books very difficult. His writing style is based on the oral tradition of storytelling. Méndez is very concerned about the loss of the oral tradition, especially in the lives of the Mexican people who, like him, have immigrated to the United States. Bruce-Novoa explains that the oral tradition has been used to pass down stories from one generation to the other. It is through this tradition that children learn from their elders. But in the United States, the children of these immigrants are growing up speaking English, encouraged by the educational system to abandon their traditional language. This creates a huge gap between the generations when the children speak English and their grandparents speak only Spanish. "The oral tradition is in danger of disappearing into the silent past," says Bruce-Novoa, "and the Chicano, cut off from this door to his heritage, could lose his cultural identity, his place in the present, and thus, disappear in the future as well." It is for these reasons that Méndez continues to write in a style that reflects his culture and the oral traditions of his people. His stories speak out for the growing silences in his traditions. Bruce-Novoa concludes that Méndez's writing "is the voice of silence crying for justice in the desert."