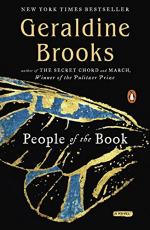 People of the Book Summary & Study Guide includes comprehensive information and analysis to help you understand the book. This study guide contains the following sections:

This detailed literature summary also contains Quotes and a Free Quiz on People of the Book by Geraldine Brooks.

Note: This study guide refers specifically to the 2008 Penguin Paperbacks Edition of People of the Book by Geraldine Brooks.

“People of the Book” is an historical novel by Geraldine Brooks which fictionalizes the history of the real-life Sarajevo Haggadah, leaping back and forth between the contemporary era where conservator Hanna Heath investigates the Haggadah, and the past, which details the Haggadah’s history. When the novel begins, the Australian conservator Hanna is called to Sarajevo to analyze and conserve the Sarajevo Haggadah, an illuminated (illustrated) book of Jewish prayer and order regarding Passover Seder. The Haggadah has miraculously survived an attack on the museum in which it has been kept during the Bosnian War, rescued by head librarian Ozren Karaman. The Haggadah is unusual because it is so beautifully illustrated, done at a time when Jewish thought prohibited illustrations of any kind in religious works.

Hanna has learned much from her mentor, Werner Heinrich, and comes to see the Haggadah not only as being important to history, but as having a history of its own. She discovers numerous important clues throughout the book, from a black girl being present in an illustration of the Seder to blood and wine stains to a white hair and a butterfly wing fragment. As Hanna travels the world to seek out friends who help her examine such clues, the novel jumps to the past to reveal how such things came to be a part of the Haggadah.

When rescued from the Nazis in the 1940s, the Haggadah was brought from Sarajevo by the Muslim librarian to a friendly Muslim family high in the mountains where a butterfly wing fragment, stirred by a slight breeze, made its way into the pages of the book. The blood and wine stains came from a Catholic priest crushing a wine glass in his hand as he recalled the horrors of his childhood, where he witnessed his Jewish parents taken away and murdered by Muslims in the late 1500s. The white hair came from a Persian cat, with Persian cat hair being used to produce brushes for art. The black girl at the Seder is Zahra, a Muslim slave owned by a Muslim emir forced her to work as an artist, after which she was given as a gift to a Jewish doctor. Zahra went on to paint illustrations of the Jewish faith for the doctor’s deaf and mute son, including herself listening to the Jewish history of freedom after which she made her own way to freedom. The illustrations became a way for the son to pay his passage on a ship, with the illustrations themselves being purchased and incorporated into the Haggadah by its creator, David Ben Shoushan, as a gift for his nephew.

In the present, with the Haggadah now being returned to public display, Hanna makes an unannounced trip to Sarajevo to see it. She discovers the Haggadah on display to be a fake, and informs Karaman and Heinrich about this. Both disagree, saying such a thing could not be possible. Six years later, in 2002, Hanna learns that the real Haggadah has been discovered in a Jewish museum library. It is revealed that Heinrich and Karaman, wanting to ensure no harm could ever again come to the Haggadah, replaced it with a perfect copy and had it taken to Israel. Wanting to spare an international incident, Hanna agrees to seek out Karaman to return the real Haggadah to the museum. Before she does so, she drops an Australian Moreton Bay fig seed into the book so that in the future, some conservator may come to discover what happened, and so that she herself can record the latest chapter of the Haggadah’s history.

People of the Book from BookRags. (c)2022 BookRags, Inc. All rights reserved.