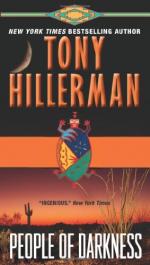 Tony Hillerman
This Study Guide consists of approximately 28 pages of chapter summaries, quotes, character analysis, themes, and more - everything you need to sharpen your knowledge of People of Darkness.

This detailed literature summary also contains Topics for Discussion and a Free Quiz on People of Darkness by Tony Hillerman.

People of Darkness is a novel by Tony Hillerman. The People of Darkness are a group of people in a peyote church who survived an explosion at an oil well because a peyote induced vision warned them not to go to work that day. These men would later die of cancer, a highly unusual event that would lead tribal police officer Jim Chee to realize that something more sinister than nature is at work here. People of Darkness is a tightly plotted novel that takes the reader from mere curiosity into the heart of a culture where motives as simple as greed are rare and seen as the sinister acts of a witch.

Tribal Police officer Jim Chee arrives at the home of B.J. and Rosemary Vines. Rosemary Vines talks to Chee about a box that was stolen from her husband's study. Rosemary believes a man named Emerson Charley might have stolen the box out of false assumption that it contains something that represented good luck in his father's peyote church. Rosemary wants to pay Chee three thousand dollars to recover the box before her husband is released from a hospital where he is recovering from a stroke. Chee does not commit one way or another to the case, but does go to the local sheriff to report the theft. The sheriff, Gordo Sena, warns Chee not to get involved with the Vines.

The following day Chee talks to a past tribal police chief about Sena. This chief tells Chee that he and Sena had a falling out after an explosion at an oil well killed Sena's brother. Sena learned that Dillon Charley and a group of roustabouts were supposed to be at the well that day but stayed away based on a vision Charley supposedly had. Sena arrested Charley and held him even when the tribal police attempted to take jurisdiction. This caused a rift between the two law enforcement agencies even though Charley was eventually released without being charged.

Shortly after this meeting, Chee gets a call from B.J. Vines requesting a meeting. Chee is told that Rosemary stole the box herself and that there is no reason for Chee to attempt to find the box. Vines then gives Chee a check for two hundred dollars for his time. Chee is not convinced, however, and decides to speak to Tomas Charley, the son of Emerson Charley. Tomas admits to stealing the box and tells Chee where to find it. Tomas also tells Chee that his father died of cancer and that his body has disappeared.

The following day, Chee and Mary Landon, a woman he met at a quilt auction, go to the malpais where Tomas said the box could be found. When they arrive, they discover Tomas's dead body and see his killer. The killer attempts to shoot them, but Mary manages to get a gun from Chee's truck and push him back. The killer blows up Chee's truck and leaves them stranded. Chee and Mary walk back to the highway despite the fact that Chee has been shot in the chest. Chee is hospitalized and visited by several law enforcement officials, one of whom tells Chee that the man who attacked him is the same man a witness saw planting a bomb in Emerson Charley's truck.

That night, Chee investigates to see how easy it would be for someone to steal a body from the hospital. On his way back to bed, Chee sees the killer talking to a nurse. Chee hides and the killer kills his roommate instead. After being released from the hospital, Chee and Mary begin investigating the men who survived the oil well explosion under the belief that this explosion is connected to Vines box and the killer. Chee and Mary quickly discover that most of the men died of a documented bout with cancer. Chee and Mary decide that this too must be connected to explosion.

In an attempt to retrieve the thigh bone of a cancer victim in order to prove the cases are connected, Chee and Mary go out to a remote area of the desert. The killer devises a way to follow them. Chee sees the killer and is able to outwit him by triggering the bomb the killer has left in his truck. Chee also leaves a note on the killer's car that informs him of the identity of his anonymous employer. After being rescued, Chee and Mary go to Vines' home where Chee has sent the killer. Chee has figured out that Vines is worried about his box because it is proof that he was the geologist supposedly killed at the oil well and that he caused the explosion in order to exploit a vein of uranium he discovered in the well. Chee arrives at Vines' house right behind the killer to find Vines dead and the killer dying.

More summaries and resources for teaching or studying People of Darkness.