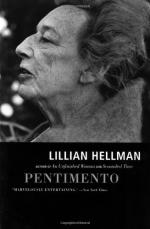 "Pentimento" by Lillian Hellman is collection of the author's recollections of people who impacted her life and who left lasting marks on her memory. Before delving into the past, Hellman explains what she was attempting to accomplish with her book and why she named it "Pentimento." The author describes what the process known as "Pentimento" is. An artist may decide that he does not like a painting he is working on and choose to paint over it. This "paint-over" is known as "pentimento."

Hellman takes the idea of this process to another level when she describes what sunlight and the environment can do to an oil painting. Over the years, the aging process can fade the top layer of a painting and cause it to lift and flake. When this happens, observers are allowed to see the original paintings beneath the top paintings in those cases when the pentimento process was used. Looking back on her long life, Hellman applied the term "pentimento" to describe what she intended to achieve with her book. She wanted to look back at her life and see it with some of the veneer removed and from the perspective of a mature woman who had gained wisdom and experience in her full life and career.

From some of her earliest memories and from anecdotal accounts she heard from relatives or gained from old forgotten letters, Lillian first tells the story of Bethe who was a distant cousin who emigrated from Germany. She was described as robust and handsome and was brought to America by her family for an arranged marriage to another distant cousin. After Bethe married Styrie, the couple moved from New York City to New Orleans. The marriage didn't last long and Styrie went missing. Bethe became involved with some Mafia types and when Styrie showed up again, these nefarious individuals beat him and amputated one of his hands. After her mobster lover's body was found in pieces in his backyard, Bethe disappeared again. The police never tied Bethe to the murder or mutilation but there were a lot of suspicions about her involvement.

As an impressionable teen, Lillian became infatuated with her Uncle Willy. He was handsome and charming and quite an adventurer. Lillian had a big crush on him and nearly got involved with him. Fortunately, her life went in a different way. When she encountered Willy again when she was older, he wanted her to go away with him to South America. She was tempted to go with the rogue adventurer but at the last minute turned the offer down. It was a good move on Lillian's part because his life eventually took a decided and tragic downturn. "Julia" is about a childhood friend who became a socialist and activist in Europe during the lead up to World War II. The section about "Julia" is the only one in which fictitious names are used for real people. When Lillian wrote the book, relatives of this person were still living and she wanted to protect their privacy. Julia was a strong person who Lillian always admired. Her life ended in tragedy but Lillian paid tribute to her courageous life.

Lillian wrote about her career and the hits and flops she had and what she learned from both. She described her encounters with colorful and famous people that her career led her to that included a wide range of people from President Roosevelt to actress Tallulah Bankhead and studio head Samuel Goldwyn. After she was established as a successful and famous writer, Lillian became friends with a strange millionaire named Arthur Cowan. Even though the man had all the accoutrements of wealth and was a jet-setter before jet-setting was in vogue, Lillian found him to be a sympathetic and somewhat pathetic figure that at times she found almost unbearable. She wrote about a snapping turtle she encountered towards the latter part of her life and career that literally defied death. She compared his tenacity to that of her long-time companion and fellow writer, Dashiell Hammett.