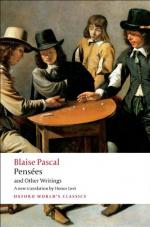 Blaise Pascal
This Study Guide consists of approximately 26 pages of chapter summaries, quotes, character analysis, themes, and more - everything you need to sharpen your knowledge of Pensees and Other Writings.

Pensees and Other Writings Summary & Study Guide includes comprehensive information and analysis to help you understand the book. This study guide contains the following sections:

This detailed literature summary also contains Topics for Discussion on Pensees and Other Writings by Blaise Pascal.

The Pensees (or 'Thoughts') is a collection of writings by Blaise Pascal, one of the great philosophers and mathematicians of the seventeenth century. Pascal was an ardent believer in the Christian religion. The Pensees was intended as a defense of Christianity, but Pascal died before the book could be fully edited and published. Thus, the Pensees is a series of fragments. Pascal was notoriously ascetic, often taking extreme positions on how Christianity required Christians to wholly repudiate the world. Pascal was not a professionally trained theologian or a systematic philosopher; despite his genius, the book, even if arranged correctly, was not intended as a grand treatise.

Pascal emphasizes a number of themes in the Pensees. He is focused on the natural depravity of human beings. He argues, among other things, that humans are inordinately concerned with themselves, that the self if left unchecked will destroy the individual and that no one can be redeemed from the self without aid from God. Only God's grace is sufficient to bring about salvation. Pascal also argues that despite man's wretchedness, because he is made in God's image he possesses greatness and something to really be proud of. He sees man's sinfulness as a reason to hate mankind but he sees man's likeness to God as a reason to love mankind. And he argues consistently throughout the Pensees that only when one accepts the dual nature of humanity, the dark and the light, can one truly make sense of the world.

Pascal also discusses some social, political and moral matters. He makes some passing criticisms of the behavior of the leadership of the Catholic Church despite maintaining the truth of their theology. He claims that all of morality is conventional and based in human power to maintain the social order. Pascal claims that custom motivates most of our actions. He expresses disdain for a general culture of being uninterested in ultimate matters and in ignoring the gravity of one's eternal fate.

Pascal is consistently concerned with the relationship between faith and reason. Pascal thinks that the two must be used together, but reason alone can bring no one to faith. In fact, when it comes to belief in the supernatural, all reason can do is argue against counterarguments—it cannot bring a soul to salvation. Only God can do that.

However, there is a partial exception. The most famous part of the Pensees is Pascal's Wager. In short, Pascal's Wager is a probabilistic argument for God's existence. Supposing that belief in God gets one to heaven and disbelief sends one to hell, it is rational to "wager" by believing if God. If God does not exist, then belief or unbelief has no cost. But if God does exist, belief has great benefits and disbelief great costs. Thus on balance it is more rational to believe in God. Pascal thinks that making the wager is unavoidable and that while belief cannot come to a man by will alone, if he is convinced by the wager, he can begin to engage in Christian practice until his belief begins to bend around his practices.

The Pensees is often published with several of Pascal's brief, but better organized essays, such as Discussion with Monsieur de Sacy (which discusses the relationship between understanding reality and the relationship between faith and reason), The Art of Persuasion (which discusses how to reason effectively) and Writings on Grace (which carves out an Augustinian middle ground between Calvinism/Lutheranism and Molinism with respect to free will, sin and predestination).

More summaries and resources for teaching or studying Pensees and Other Writings.

Pensees and Other Writings from BookRags. (c)2022 BookRags, Inc. All rights reserved.