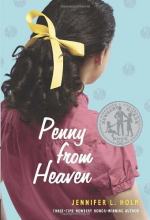 Jennifer L. Holm
This Study Guide consists of approximately 47 pages of chapter summaries, quotes, character analysis, themes, and more - everything you need to sharpen your knowledge of Penny from Heaven.

This detailed literature summary also contains Topics for Discussion and a Free Quiz on Penny from Heaven by Jennifer L. Holm.

Penny from Heaven by Jennifer L. Holm is a story about a young girl who is on her way to adolescence. Barbara Ann Falucci, who has always been known by the nickname Penny, lives with her mother Eleanor, grandmother Me-me and grandfather Pop-pop in New Jersey in the mid 1950s. Her father, who came from a large Italian family, has been dead since Penny was so young that she barely remembers him at all. Despite her many efforts to find out the truth, the circumstances of his death are a mystery to her. As a result, Penny often wonders about heaven and death, although she has no intention of dying herself until she is at least a hundred years old or more.

Penny's best friend is her cousin Frankie, and they spend a great deal of time together, sharing many of the same interests. They both enjoy baseball, which is a sport her Uncle Dominic also loves, and Penny often listens to the game while sitting with her Uncle in his 1940 Roadking in Nonny's driveway. Uncle Dominic lives in his Roadking, and works for her Uncle Ralphie at Falucci's Market cutting meat. A bit of an eccentric, Dominic is most often seen in his slippers, even at work, and is not a large fan of large groups of people. Penny and Frankie work for the summer at the market as well, delivering meat orders to various customers in the neighborhood. Frankie is also prone to getting into trouble. His father has trouble holding onto work and as a result sometimes Frankie's schemes to bring money into the family home do not turn out as well as he plans. One such episode includes his theft from the collection plate at church. He breaks a window in his escape after being caught in the act, and spends weeks afterward working for Uncle Nunzio in his clothing factory to pay for the damages.

Penny's family is divided. Her fathers side doesn't socialize with her mother's side, and the only real link between them is Penny, who often goes over to help Nonny with laundry and other chores. When Frankie hears a rumor that Grandpa Falucci hid money in the house before he died, he enlists Penny's help to search for it. They begin by searching the yard, but Nonny almost catches them. Next Frankie shares his theory that it is actually in the basement. He convinces Penny to help him and offers to do Nonny's laundry in order to gain access to the area. He actually does find a box of money, but distracted, Penny's arm gets caught in the wringer washer and she is pulled in up to the elbow. During weeks of recovery, Penny grows up emotionally. She learns the truth about her father's death, comes to accept her mother's new boyfriend and future husband, and learns about mortality — her own and others.

More summaries and resources for teaching or studying Penny from Heaven.