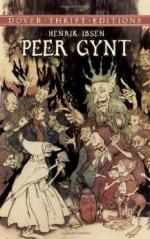 Discuss the use of Christian allegory in Peer Gynt.

Peer Gynt has been described as the national story of Norway. Research the social history of 19th century Norway, and try to explain why you think this play has such appeal.

Peer Gynt is based on myths and fables. Research some Norwegian fables and try to explain how this play might be similar or different from those fables.

In Act IV, Peer travels extensively and has many adventures, all as he seeks to become wealthy. Do some research into the economic situation in 19th-century Norway. Try to determine what life was like for people without family wealth. Consider what Ibsen might be saying about the relative importance of economic security.

In Peer Gynt, Ase loses everything after she is fined. However, the crime is Peer's. Investigate the legal system in place in 19th-century...