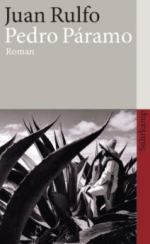 This detailed literature summary also contains Topics for Discussion and a Free Quiz on Pedro Paramo by Juan Rulfo.

Pedro Páramo's estranged son, Juan Preciado, comes to find his father after his mother's death, but instead he finds only a town deserted except for its ghosts. Through a complex narrative told from multiple points of view, which skips forward and backward in time, author Juan Rulfo explores the life of don Pedro, a man who is both a villain and a tragic figure.

The novel opens as Juan Preciado is headed to Comala after his mother's death. He meets a stranger on the road, who later turns out to be dead. In the town, he stays with a woman who is also a wandering soul. Comala turns out to be a kind of purgatory, full of its dead souls, who wander the town, usually unaware that they are dead. Juan himself, after being taken in by a woman and her brother who are living in sin, dies in Comala and is buried there, never able to meet his father, who is now dead as well. Juan hears the voices of the other people buried around him and learns stories about the town and its people.

Pedro Páramo is a wealthy landowner. When his father dies, Pedro finds he is in debt, and he marries Dolores, Juan Preciado's mother, because he owes her family the most money. Don Pedro is an ambitious, ruthless man, and he is willing to kill whoever gets in his way or play any angle that will keep him in power. However, don Pedro only wants to acquire wealth to give to his lost love, Susana, a girl that moved away from the town when don Pedro was a boy.

Don Pedro tires of his wife Dolores quickly, and he seems pleased when Dolores leaves with his son Juan to go live with her sister. Dolores refuses to return unless don Pedro sends for her, which he never does. She dies in bitterness, begging Juan to find don Pedro and make him pay. After Dolores moves away, don Pedro takes in one of his illegitimate sons, Miguel, who grows up to be a rapist and murderer. The priest who brought Miguel to don Pedro is riddled with guilt and wants to refuse to pardon Miguel when he dies in an accident, but ultimately don Pedro buys a pardon for Miguel from the priest.

Don Pedro is obsessed with his own personal bitterness. All his life, don Pedro has longed for Susana, who moved away when don Pedro was a child. Don Pedro learns that Susana is now a widow. He does everything in his power to get Susana's father to return to Comala and to get Susana as a wife. Finally, Susana and her father move back to Comala, and don Pedro gets rid of her father and takes Susana as a wife. She, though, is lost in a dream of the past, moaning and brooding over her husband's death, until finally she dies.

Don Pedro's hope and dreams that lived in Susana are never fulfilled. Susana, who truly had happiness, has lost it forever. Juan, whose hopes are tied to his father, dies, like his mother, with those hopes unfulfilled. In the end, don Pedro himself dies. The empty, purgatorial town Comala, lives on, filled with its ghosts and unfulfilled dreams.