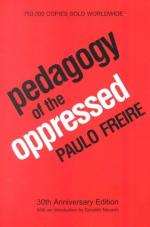 Paulo Freire
This Study Guide consists of approximately 14 pages of chapter summaries, quotes, character analysis, themes, and more - everything you need to sharpen your knowledge of Pedagogy of the Oppressed.

Pedagogy of the Oppressed Summary & Study Guide includes comprehensive information and analysis to help you understand the book. This study guide contains the following sections:

This detailed literature summary also contains Topics for Discussion on Pedagogy of the Oppressed by Paulo Freire.

Paulo Freire's Pedagogy of the Oppressed is a combination of philosophical, political, and educational theory. Freire outlines a theory of oppression and the source of liberation. In Freire's view, the key to liberation is the awakening of critical awareness and the thinking process in the individual. This happens through a new type of education, one which creates a partnership between the teacher and the student, empowering the student to enter into a dialogue and begin the process of humanization through thought and its correlative, action.

Freire begins his book with a preface, which introduces the idea of developing a critical consciousness in the oppressed. Freire introduces the problem of the fear of freedom in the oppressed, who are affected by being submerged in a situation of oppression. Oppressed people must see outside themselves, understand their situation, and begin to think about their world. This happens through dialogue in education. Freire makes it clear that his perspective is radical, and that to agree with his theories the reader must embrace change.

Freire relates critical consciousness and the resulting synthesis of thought and action as a way to reclaim humanity, to become humanized. This, Freire contends, is a fundamental drive of humanity, while oppression is dehumanizing, both for the oppressed and for the oppressors. Freire states that only the oppressed can save themselves and the oppressors from oppression, and liberation must come from within the oppressed, who must work their way through thought to a critical understanding of reality, which leads to action.

Freire calls the traditional relationship of teacher and student "banking education". In this dysfunctional, oppressive system, the teacher retains control and takes on the role of an oppressor, while the student is expected to be a passive, unthinking, follower. The teacher deposits information into the student, who is an empty receptacle for these deposits. Freire proposes problem-posing education as the successful alternative to traditional education. Problem-posing education is structured to encourage thinking in students. In this form of education, the teacher and the student enter into partnership and join in a dialogue to jointly come to conclusions about problems. The solutions must not be predetermined by the teacher, but instead must be come to together during the process of dialogue. The teacher and students learn from each other.

Freire details a methodology to work with people in a community to understand the themes that are important to their lives and to generate objects for study, such as pictures, audio interviews, film strips, texts, or other media, to serve as the focus of dialogues. Then, Freire outlines how his theory applies to politics and to the rise of revolutionary leaders among the oppressed. He outlines four oppressive techniques that are opposed to dialogue and that oppressive leaders use to control the people. These are conquest, division, manipulation, and cultural invasion. Four pro-dialogue, revolutionary techniques stand in opposition to these and must be used by revolutionary leaders. These are cooperation, unity for liberation, organization, and cultural synthesis.

More summaries and resources for teaching or studying Pedagogy of the Oppressed.

Pedagogy of the Oppressed from BookRags. (c)2022 BookRags, Inc. All rights reserved.