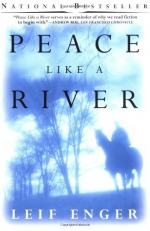 Peace Like a River Summary & Study Guide includes comprehensive information and analysis to help you understand the book. This study guide contains the following sections:

This detailed literature summary also contains Topics for Discussion and a Free Quiz on Peace Like a River by Leif Enger.

Peace Like a River is the story of a man touched by God, Jeremiah Land and the way divine providence plays itself out in the trials of Jeremiah and his family. Jeremiah and Helen Land had three children, Davy, Reuben and Swede. However, when Jeremiah miraculously survived being swept up by a tornado and decided to quit medical school and become a janitor, she left him. Thus, the children grow up with Jeremiah raising them all alone.

Jeremiah is an extremely religious Christian and appears to be in regular contact with God Himself. When Reuben, the narrator and main character, sees his father praying one night, vigorously, he sees Jeremiah walk on air without even realizing it. But this was not Jeremiah's only miracle. He had revived Reuben after his birth twelve minutes after he stopped breathing and he had survived the tornado attack.

The main storyline begins with an altercation between two high school bullies, Israel Finch and Tommy Basca and Davy's girlfriend, Dolly. Jeremiah stops them from assaulting Dolly by beating them up and then they threaten his family. Jeremiah refuses to escalate but Davy cannot stop himself; the conflict ends up with Davy shooting Tommy and Israel when they break into the Land's home. This leads Davy to trial for murder, which never finishes because he escapes from jail.

Jeremiah's faith is shaken and he falls into depression until he decides to take Reuben and Swede and search for Davy being led to him by God alone. However, Davy is not safe. He is being hunted by the feds, particularly by a federal agent named Mr. Andreeson, who Jeremiah refuses to help. When the Land's run out of oil, they stop at a gas station run by a sturdy woman named Roxanna. A snowstorm traps them with her for days, during which time Jeremiah decides to court her and the children develop a close attachment to her.

All the while, Davy has been visiting Reuben. He has been staying with a paranoid and dangerous man, Jape Waltzer, and the girl he is raising to be his wife, Sara. Jeremiah and the local authorities never find Davy. And Waltzer eventually kidnaps and kills Mr. Andreeson.

When there is no more sight of Davy, Jeremiah and Roxanna take the children home to Roofing, Minnesota and they get married. A few months later, Davy shows up with Sara. Jape had decided to make Sara his wife, and Davy escaped with her. After he stayed the night, the Land's find Jape in the front yard. He shoots both Jeremiah and Reuben. They both pass into "the next country" (a euphemism for heaven); Jeremiah goes into the city of God and turns Reuben back. When Reuben awakes, Jeremiah has died but miraculously, Reuben's lungs, which had troubled him his whole life and throughout the book, are healed. Reuben had often wondered why Jeremiah's miracles never applied to him, given his suffering. But only when he gave up trying to control the role of divine providence in his life, does God work a miracle on him through Jeremiah.

Peace Like a River from BookRags. (c)2022 BookRags, Inc. All rights reserved.