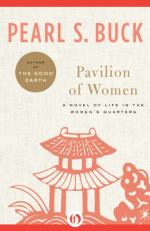 Pavilion of Women: A Novel of Life in the Women's Quarters Summary & Study Guide

Pearl S. Buck
This Study Guide consists of approximately 66 pages of chapter summaries, quotes, character analysis, themes, and more - everything you need to sharpen your knowledge of Pavilion of Women.

Pavilion of Women: A Novel of Life in the Women's Quarters Summary & Study Guide Description

Pavilion of Women: A Novel of Life in the Women's Quarters Summary & Study Guide includes comprehensive information and analysis to help you understand the book. This study guide contains the following sections:

This detailed literature summary also contains Quotes and a Free Quiz on Pavilion of Women: A Novel of Life in the Women's Quarters by Pearl S. Buck.

Set in pre-world war China, Pavilion of Women is the story of Madame Wu, the highly respected matriarch of an expansive and wealthy family. In many ways traditional and conservative in terms of morality, spirituality, and household practicality, she undergoes a significant transformation on all three levels as the result of a series of encounters with the European tutor of one of her sons. By the novel’s conclusion, she has come to a new and deeper understanding of herself, her family, and her culture.

As the novel begins, Madame Wu is celebrating her fortieth birthday with a momentous decision – she is going to bring a concubine (sexual companion) for her husband into the household. Because her word is viewed and acted upon as law in the multi-generational Wu family, those whom she tells of her decision suppress their shock and resentment. The one family member who is less successful at that suppression is Mr. Wu, who protests that he still loves Madame Wu and still finds her desirable. Convinced that her decision is the correct one, Madame Wu maintains complete control over the situation, chooses the orphaned Ch’iuming, and withdraws to a separate part of the family compound, convinced that she has shaped events in the family to give her long-standing peace.

Madame Wu’s peace does not last long, however. Her two older sons have difficulty with their wives; her flighty best friend proves simultaneously warm and irritating; and the visits of a female Christian missionary become increasingly annoying, to the point when Madame Wu becomes inclined to ban her from the house. Her inclination changes, however, when she realizes that her youngest son, in need of developing a more peaceful relationship with his new, worldly educated wife, needs a private tutor. Madame Wu asks the missionary whom she recommends, and the missionary arranges for the Wu family to be visited by the formidably, gently learned Brother Andre.

When Madame Wu meets Brother Andre, she finds himself immediately drawn to his ideas and his teachings: a secret reader and introspective thinker in circumstances when women were valued solely for their reproductive capabilities, Madame Wu finds her mind and spirit reawakening as the result of Brother Andre’s teaching. Meanwhile, her son’s marriage improves; the relationship between Mr. Wu and Ch’iuming results in a pregnancy for the latter; and the environment of the household is changed by the sudden death of Mr. Wu’s mother.

Eventually, Brother Andre’s pupil resolves to leave the family home and travel to America. For a while, Andre’s visits stop, but they eventually resume. Madame Wu is unwilling and/or unable to let her own education come to an end. She finds her intellectual and spiritual awareness deepening, frequently losing herself in contemplation, much to the consternation of her family. Over time, a series of further difficulties (including the deaths of both Brother Andre and another of her sons, and the arrival of another concubine) sends Madame Wu even further into spiritual searching, and she finds both herself and her life reaching new depths of enlightenment. The novel concludes with Madame Wu’s dawning realization that her soul is truly immortal.

More summaries and resources for teaching or studying Pavilion of Women: A Novel of Life in the Women's Quarters.

Pavilion of Women: A Novel of Life in the Women's Quarters from BookRags. (c)2022 BookRags, Inc. All rights reserved.